A regular football match of the Russian Professional Football League (PFL) quickly became quite messy after a sudden snowstorm converted the entire pitch into a white sheet within just 30 minutes.

A snowstorm broke out during a match between Volna and Volga, forcing the officials to change the ball, which appeared to be practically invisible on the white surface.

READ MORE: ‘Back where you belong’: Mesut Ozil ‘happy’ at return of Gunnersaurus after offering to pay axed legendary Arsenal mascot’s salary

The field was completely covered with snow within half an hour, and the two teams looked more like bandy players, sliding around on the slippery grass.

Referees gave the placers a red ball in the second half to make the game a little bit easier in the harsh conditions.

The only goal was scored in the 79th minute by Volga forward Ilya Karpuk, who brought victory to his team.

This was the last game of the PFL’s autumn season, and the games will not be resumed until April. 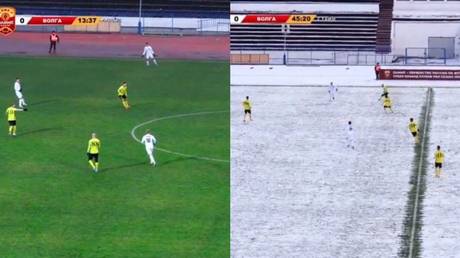