UFC welterweight Mike Perry hailed the contribution of his girlfriend, who acted as his lone corner person during his decision win over Mickey Gall at UFC Vegas 4 on Saturday night.

Perry was widely mocked for his bizarre decision to abandon a traditional fight night coaching team as he instead arrived at the octagon on fight night with only his girlfriend Latory Gonzalez in tow, armed with just a bucket and an ice bag.

Despite his out-of-the-ordinary approach to his corner, Perry went on to claim an impressive win over Gall, and hailed his girlfriend’s support and contribution to his success on fight night.

“She did a great job, she kept it very simple,” Perry said.

“She shouted a couple of things – I heard her during the fight and I remember telling myself, ‘OK, there you go, she’s getting into it now!’

“She was like, ‘Keep your hands up!’ There was that one time he swung and had just missed and… ‘Get your hand back up!’ and I was like, ‘All right.’

“In the corner, when she was rubbing the ice on me she kept asking me, ‘Hey, is this OK? What else do you want? What can I do?’ And she was trying to do more for me and it was really cool just sitting there quiet and just thinking about how the next round was going to go.”

Perry also explained how being able to hear Gall’s corner between rounds, which helped him anticipate his opponent’s moves when their corner was shouting codewords and instructions during the fight itself.

It all added up to one of Perry’s best performances in a while as he defeated Gall by unanimous decision to snap his two-fight losing streak and return to the win column in the UFC’s packed welterweight division.

👀➡️ Inside the new look corner of @PlatinumPerry. #UFCVegas4 pic.twitter.com/iuxxYE6Uvb

Perry said he was upset by the attitude to his girlfriend leading into the fight, as she was exposed to the more cynical attitude of elements of the media and the fanbase online.

“This is all kind of new to her,” Perry said.

“Everybody loves her, but all these people hating because of me. It makes me feel kind of bad sometimes that I brought her into that, but that’s what happens when you get attention and people just start hating on it.

“They hating on our dreams and our goals, so I really try more to coach her. She thought people were one way and she’s starting to see people are totally a different way. She was like y’all innocent until proven guilty and to me y’all guilty until proven innocent.”

With a big win under his belt, Perry said he hopes to build on his success, and start to rebuild a team around him, with people who can be friends as much as teammates or coaches. One man who might fit the bill, he suggested, was Cuban middleweight contender Yoel Romero.

“Look I don’t want anybody else in my life – I just want me and my girl,” he explained.

“But obviously, I know I’m going to need some help. And, who knows, if I go train with Yoel Romero, I’d be down for him to get a slot in the corner if he wants.

“I showed the world I understand how to win and I didn’t need anybody to help me do it. I just needed my girl to bring me a bottle of water and rub that ice on my neck. God, it was so good! And yeah, it’d be nice to build something.” 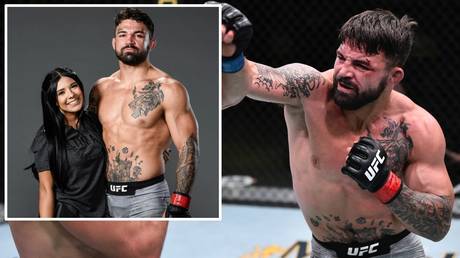