UFC stunner Mackenzie Dern has been enjoying some sunshine at the start of a year in which she will aim to continue her ascent up the strawweight rankings towards a potential title shot.

Dern, 27, secured three wins from three fights in 2020, bouncing back after her defeat to the highly-rated Amanda Ribas in October 2019 – which to date is the only blemish in Dern’s 11-fight professional MMA career.

Dern’s victory against dangerous Brazilian Virna Jandiroba at UFC 256 in December came via unanimous decision and forced the Brazilian-American grappling sensation to overcome a suspected broken nose in the second round.

The bout also allowed Brazilian jiu-jitsu world champion Dern to showcase her rarely-seen stand-up skills, which she says she’s been working on to transform herself into a more rounded fighter as she plots a course up the 115lbs rankings – where she currently lies 11th.

“Of course I wanted to fight someone ahead of me in the rankings. I’m in no rush to fight in January or February, but I’ll keep on training in case I need to fight on short notice.

“Maybe I’ll fight again in March or April. Let’s see how the ranking changes. Then it’s easier to see what’s a good fight for me.”

In the meantime, Dern has been making use of her downtime by relaxing on the beach, sharing some smiling images of herself in a bikini with her 870,000 followers.

The location was tagged as Peruíbe in the state of Sao Paulo in Brazil.

Fans were impressed, with one reply reading: “I will say your our one of the hardest work women in the game, total body transformation since you join the UFC and you’re [kicking ass]. Keep up the hard work and enjoy the time off.”

Dern’s sole defeat to Ribas – who herself is on a five-fight winning streak – came just four months after she gave birth to daughter Moa.

While the UFC already has a mother as a world title holder after two-weight queen Amanda Nunes enjoyed the arrival of her daughter with partner Nina Ansaroff in September 2020, Dern has previously said she would relish the title of ‘Mom Champ’.

A busy 2021 beckons for the popular star – but first, she’s clearly enjoying some downtime on the beach. 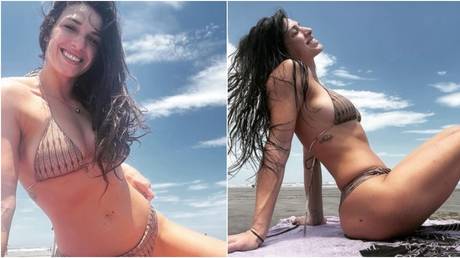