Valencia winger Goncalo Guedes scored one of the goals of the La Liga season as he rampaged halfway up the pitch, somehow managing to stay on his feet and beat four players before finishing emphatically.

The Portuguese ace produced the moment of magic in the 12th minute of his team’s home clash with Osasuna on Sunday, collecting the ball deep in his own half before setting off on a slaloming run to slice open the opposition ranks.

The flying wingman somehow rode the first two challenges, managing to stay on his feet and surge into the box, beating four players in total as he then cut inside to thunder the ball into the top corner of the Osasuna net.

The solo show from the 23-year-old Guedes was instantly hailed as one of the strikes of the season.

Takes it from halfway, beats four players and then the keeper! 😱

After they had an early goal disallowed Valencia now have their lead 🦇 pic.twitter.com/HpUEpYrcNF

Rodrigo added a second for Valencia later in the first half as they cemented their position in eighth in the table, two points off Real Sociedad and Villarreal in front of them.

It also earned Valencia a first win since the return of football from the Covid-19 break, having drawn with Levante in their comeback game before being handed a 3-0 hammering at the hands of Real Madrid during the week.

Guedes joined the Spanish coastal club from French giants Paris Saint-Germain in the summer of 2018, in a deal worth a reported €40 million plus up to €10 million in add-ons.

The Portuguese international has struck 15 goals in 94 appearances for Valencia, also providing 17 assists. 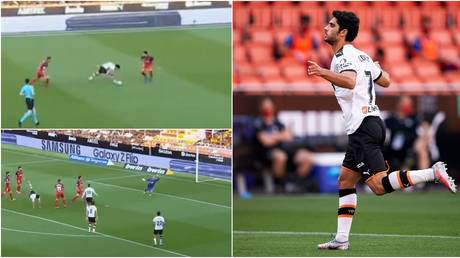