Former UFC title holder Cody Garbrandt has told new Russian champ Petr Yan that he is ready to beat him, reacting to a photo posted by the winner at UFC 251 in which he posed in a swimming pool while calling Garbrandt “no chin”.

Garbrandt labeled Yan “too slow” despite his impressive win over Jose Aldo to claim the UFC bantamweight crown with a fifth-round stoppage on Fight Island on Saturday, causing Yan to react by calling him “too dumb, no chin”.

Yan then posed in a pool with veteran former victim Urijah Faber, calling the man he beat in three rounds in December “uncle” and asking Garbrandt: “Where are you at, no chin?”

That incited Garbrandt, who suffered three successive knockout defeats before inflicting one of his own on Raphael Assuncao at UFC 250 in June, to insist that he was waiting to dethrone Yan and suggest he was boring.

You can see me whenever you are ready to get that ass beat Petr “Too Slow” Yawn!! https://t.co/WZfWMOia89

“You can see me whenever you are ready to get that ass beat, Petr ‘Too Slow’ Yawn,” wrote Garbrandt, showing little fear in engaging with his latest critic from within the ranks.

Yan had been widely praised for the performance that made him the second Russian UFC champion after Khabib Nurmagomedov, but there was a notable exception in the form of the man who vacated the title he won.

Henry Cejudo qualified his congratulatory message to Yan by telling him that he “absolutely sucked” and would be “lucky to make it past two rounds” with him.

Cejudo, who announced his retirement after successfully defending the title against Dominick Cruz at UFC 249 in May, then reprised an earlier barb in which he called Yan an “ugly Communist potato” and described his successor as “rent a champ”.

Yan cut Cejudo short shrift, calling him “cringe” while replying: “You had the opportunity to fight me but you chose the easier option and ran away.

How cute the “rent a champ” is calling me out! Why don’t you take out that dirt Q-tip @SugaSeanMMA that’s easy money 💰 But please @danawhite give me that overgrown midget @alexvolkanovski I’ll make him bend the knee! 🔪 🐐 🥇🥇🥇+🥇= C4 https://t.co/hgvqzxlnAy

“Now you are barking from the safe distance, clown. Come back and I will retire you again.”

Cejudo mocked Yan’s reply as “cute” and asked UFC president Dana White to let him fight Alex Volkanovski, who secured a controversial decision over Max Holloway at UFC 251 and has been repeatedly referred to as an “overgrown midget” by the American.

One fan predicted: “Cejudo would be calling Yan daddy after one round. That little hobgoblin needs to settle down.”

Faber backed his friend and former rival, writing: “Sounds like Petr Yan is now ready to fight Cody. [Yan is a] very tough champion but too slow for Cody.” 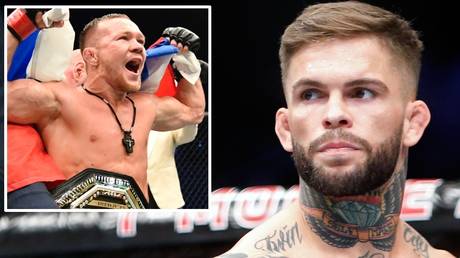