World Athletics chief Sebastian Coe has said he supports athletes’ right to take a knee during award ceremonies at next year’s Summer Olympics to advocate for social justice and racial equality.

Coe is paying a courtesy visit to Japan where he is meeting with the Tokyo Games organizers.

He underlined that it’s important for future Olympic participants “to reflect the world they live in” despite contradictions with the Games’ charter, which strictly prohibits any political demonstrations.

Rule 50 of the Olympic charter promotes political neutrality at the Games, banning the raising of fists or taking knees during medal ceremonies.

“No kind of demonstration or political, religious or racial propaganda is permitted in any Olympic sites, venues or other areas,” the rule says.

It has come under fire from social rights advocates, who have called for changes to Olympic restrictions in the light of recent protests and the Black Lives Matter movement, triggered by the killing of unarmed black man George Floyd.

“I’ve been very clear that if an athlete chooses to take the knee on a podium then I’m supportive of that,” Coe said.

“Athletes are a part of the world and they want to reflect the world they live in. For me, that part is perfectly acceptable as long as it is done with respect – complete respect – for other competitors, which I think most athletes properly understand,” he added.

In July, the Athletics Association, which represents the rights of track and field athletes, also vowed to defend athletes’ right to protest against racism during the Games.

The Tokyo Games, which were postponed for one year due to the Covid-19 pandemic, are expected to take place next summer from July 23 to August 8. 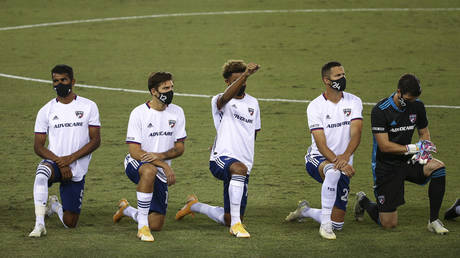