The contrast between Barca’s dismal 8-2 quarterfinal defeat to Bayern and the glory days of Guardiola’s reign at the helm, guiding a squad including Messi to Champions League glory in 2009 and 2011, could not have been starker.

After becoming the crestfallen figurehead of arguably the worst night in the Spanish giants’ history, when he was even caught on camera looking isolated in the locker room at half-time, Messi is said to have called his old boss to discuss a move to Premier League heavyweights City this summer, ESPN has reported.

Messi sent shockwaves through the football world by faxing his intention to leave imminently to Barcelona on Tuesday, arguing that an expired clause in his contract that had allowed him to leave this year remained valid because of the break to the schedule enforced by the COVID-19 pandemic.

City have been busily consulting their books to deduce whether they would be able to afford the vast sum that is likely to be required to lure Messi.

The club is required to work within certain limits in order to meet Financial Fair Play regulations but any attempt to sign Messi would be hugely costly, even if the striker was available on a free rather than the release clause of around $815 million that could be activated.

Leaving the club where he has spent his entire career and is the record goalscorer would be a huge wrench for the 33-year-old striker, making an agreement with a familiar manager who he knows he can thrive under a potentially decisive part of his plans.

Much was made of departed Barca coach Quique Setien’s perceived profligacy in deploying Messi effectively, and the forward has no previous relationship with new manager Ronald Koeman.

Messi was the Champions League top marksman in each of Guardiola’s campaigns at the Camp Nou, scoring a remarkable 43 goals in the competition under the former Barcelona midfielder.

He has managed just three goals in Europe this season, while City were astonishingly wasteful in their surprise 3-1 quarterfinal exit to Lyon, registering 18 shots to their modest French opponents’ seven, including a gilt-edged chance that England striker Raheem Sterling spurned to equalise late in the match.

Guardiola is understood to have sounded out Messi about the “project” awaiting him in England should he decide to join the former Premier League champions, who are undergoing something of a rebuilding process after being comprehensively dethroned by rampant Liverpool.

The report also claimed that “high-ranking executives” had spoken to the Argentina hotshot and were aware of his situation before the unsurprising ousting by Bayern in Lisbon.

UEFA has loosened its financial regulations because of the pandemic, and City are likely to wait to discover whether Messi’s annual clause, which allows him to leave the club for free shortly after the traditional end of each season, will be extended.

Bookmakers have installed City as the odds-on favorites to secure Messi’s signature in light of his rumored cordial conversation with Guardiola, although he is also short odds to stay at Barcelona, where his exit demand is thought by many to be a show of discontent against the mismanagement of the club. 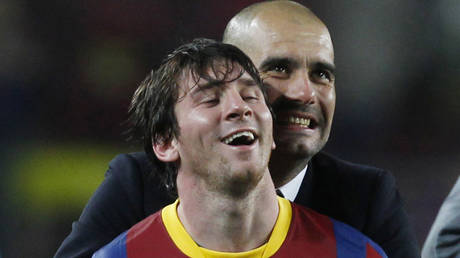