‘People are already gathering’: Abdulmanap Nurmagomedov to be buried in Dagestan home village

‘People are already gathering’: Abdulmanap Nurmagomedov to be buried in Dagestan home village

Abdulmanap Nurmagomedov, the late father of UFC lightweight champion Khabib, will be buried in his home village of Kirovaul in the Russian Republic of Dagestan, local leaders have said.

Nurmagomedov Sr died at the age of 57 in a Moscow hospital on Friday, following heart and brain complications caused by a coronavirus infection.

“The brothers went to the airport, today they must bring (the body),” said local leader Ilyas Khaziev.

“They will bury him their native village, in Kirovaul, if they manage [to return] in time today, then today we will bury him.

“Relatives have already arrived in the village, everyone has already gathered, of course more people will still gather.”

He added, however, that due to coronavirus concerns the burial would have to be a low-key affair.

“The head of the area came and the [Nurmagomedov] brothers, they said it’s not allowed to have a crowd at the burial.

“A lot of people in the family have been infected with the coronavirus, so they decided no to have a large burial.

“There will be around 10 people, only close relatives.”

Tributes have poured in to the respected MMA trainer after the news of his passing was first announced by Chechen leader Ramzan Kadyrov on social media channels on Friday.

While the full details are still emerging, Abdulmanap Nurmagomedov is reported to have succumbed to brain injuries caused by a stroke following a Covid-19 infection. He had also suffered heart complications.

He had first been taken ill in Dagestan in April before being transferred to Moscow when his condition worsened.

He had regained consciousness after being placed in a coma, and was even able to communicate at a basic level with those around him, including his son Khabib.

However, his condition deteriorated and he was reportedly unconscious again for several days leading up to his death. 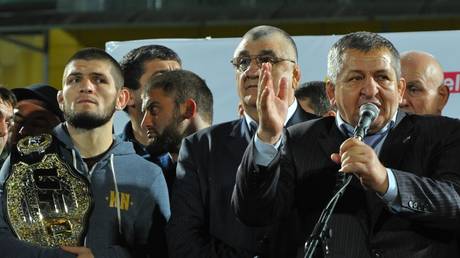 ‘He raised a worthy generation’: H...