Tony Ferguson has taken to social media to tell the UFC to stump up the cash and make sure his lightweight matchup with rival Dustin Poirier doesn’t fall by the wayside.

Former UFC interim lightweight champions Ferguson and Poirier were linked with a big-time clash, with fans getting excited about the potential clash after UFC president White admitted that the pair would “probably” fight.

But, after the UFC reportedly refused to meet Poirier’s pay demands for the fight, White revealed at the weekend that the UFC was moving on from the and that they would find an alternative opponent for Ferguson.

“No. We’re not even trying to salvage it,” White told reporters at the UFC Vegas 10 post-fight presser.

“We’re getting another (opponent).”

But Ferguson took to social media to back his potential opponent as he called on the UFC to open their pocketbook and pay Poirier to make the fight a reality.

“‘Here’s Lookin’ At You Kid’ Pay the man @danawhite @ufc,” he tweeted.

“Love ya’ll but let’s give the hardcore & casual fans what they deserve, a good fight Sir.”

There was also backing from another ranked UFC lightweight, Al Iaquinta, who responded to a tweet suggesting Ferguson should face Dan Hooker or himself instead by commenting, “Tony should fight Dustin and only Dustin.”

Tony should fight Dustin and only Dustin 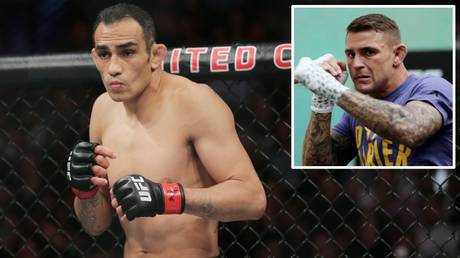