The decision to strip Donald Trump’s Bedminster golf course as the host of the 2022 PGA Championship amid last week’s riots at the US Capitol has left some of his most ardent supporters renewing claims of “cancel culture”.

After being locked out of his social media profiles and, if reports are to be believed, facing the prospect of an historic second impeachment this week, things went from bad to worse for the 45th United States president on Sunday when reports were confirmed that the Professional Golfers’ Association (PGA) had resolved to hit Trump where it hurts the most: on the golf course.

Trump, among the most active golfers to have ever held the White House, has long held a keen association with the sport – using the fairway as both a place to hold meetings as well as an avenue to blow off steam, often at the expense of the US taxpayer.

And as Trump continues to grapple with the fallout of last week’s demonstrations in Washington DC, the PGA continued the presidential pile-on by confirming reports that they were to strip Trump’s Bedminster golf resort of its hosting rights for the 2022 PGA Championship – a move which hasn’t gone down well with the Trump Organization, or the president’s legions of followers.

“We have had a beautiful partnership with the PGA of America and are incredibly disappointed with their decision,” the Trump Organization said in a retaliatory statement directed at the PGA, which had said that keeping the event at a Trump-branded property would be “detrimental” to their brand.

“This is a breach of a binding contract and they have no right to terminate the agreement. As an organization we have invested many, many millions of dollars in the 2022 PGA Championship at Trump National Golf Club, Bedminster. We will continue to promote the game of golf on every level and remain focused on operating the finest golf courses anywhere in the world.”

This reaction was matched by sections of Trump’s vigorous online support, who railed against what they saw as another example of “cancel culture” against the president.

What a disservice to the Bedminster club and the area businesses, pathetic cancel culture decision.

It’s all a great idea until they start canceling YOU. People wishing ill on the Trumps deserve the same. You don’t have the courage to try to cancel BLM but are quick to join in with the popular movement of the moment. Sickening to know there are so many hateful people out there.

Players should boycott playing in the tournament after this completely cowardly move.

Trump, who will exit the White House on January 20, has previously awarded the President Medal of Freedom (the highest civilian honor available in the United States) to several golfers, including Tiger Woods, Babe Didrikson Zaharias, Gary Player and Annika Sorenstam – the latter two of which came in wake of the Capitol riots, leading to condemnation from sections of golf fans due to Trump’s perceived role in the unrest.

As noted by ABC, the 2022 PGA Championship was the sole large event on the Trump Organization’s golf calendar – suggesting the Trump’s entry-point into the prestigious (and highly lucrative) sport has eroded.

This marks the second time that the PGA has publicly rebuked Trump. In 2016, they opted to dismiss an agreement to hold a World Golf Championship at a Trump resort in Florida following controversial statements made by the then-presidential candidate about Mexican immigrants.

They moved the event to Mexico City instead. There is as of yet no indication as to the new destination of the 2022 PGA Championship tournament. 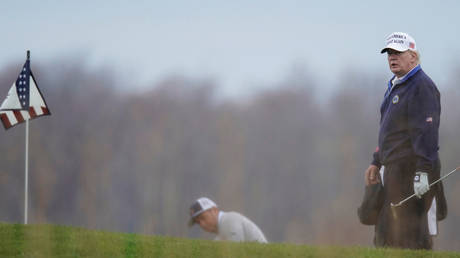