Manchester United fans are divided after the club announced the capture of former Paris Saint-Germain striker Edinson Cavani on a free transfer on Monday.

The club confirmed the Uruguayan, who was a free agent after he left PSG when his contract expired in June, has signed a two-year-deal at Old Trafford.

Cavani bagged 200 goals and 43 assists in 301 matches for PSG, although last season he struggled for fitness and played just 22 times, scoring seven goals.

With Cavani having been available throughout the summer, many fans have expressed concern at the club signing him so late.

“Might be a good signing but cries out panic buy, been a free agent for months why wait till last days of [the[ transfer window, another [Ed] Woodward window” questioned one fan on Twitter.

Other supporters said United are a “very very desperate club” while one even described the Red Devils as “pathetic” for pursuing the 33-year-old.

Might be a good signing but cries out panic buy, been a free agent for months why wait till last days of transfer window, another woodward window #mufc

I actually cannot get over Man United signing Cavani, it’s about 8 years too late surely 😂

They’ll be back in for Sneijder before the end of the window at this rate.

Anyone saying Cavani is a baller and he’ll prove people wrong. That’s questionable but it’s not the point. The point is we’re paying him more than Salah, Kane, Bruno, and many more. So at that price he better be the best striker in the league. Because that’s what we’re paying him

Speaking at the weekend when United suffered a humiliating 6-2 home defeat to Tottenham, former defender Gary Neville expressed mixed sentiments about Cavani’s signing, saying: “They need a striker, they need a forward. My emotion when I heard about the deal on Saturday was the same probably as when Radamel Falcao signed, when Zlatan Ibrahimovic signed, Odion Ighalo signed. It’s very last-minute, it’s come out of nowhere.

“There is an element of thrill to it, an element of intrigue because he is one of the world’s best strikers in the last 10 years. You hope he can come to Old Trafford and set the Premier League on fire.”

Others were more enthusiastic as the prospect of Cavani’s arrival, describing him as an “unreal” and a “great” signing. Another felt the hitman “still has something to offer” and will provide an upgrade over Odion Ighalo.

Ighalo, who is on loan from Shanghai Shenhua until January, has been the club’s only other attempt to replace Romelu Lukaku after he was sold to Inter Milan last year.

United had success in signing a former PSG teammate of Cavani’s, Zlatan Ibrahimovic, in 2016. Despite being 34 at the time of his move to Old Trafford, the Swede notched 29 goals in 53 games for United.

Cavani’s arrival follows the signing of Donny van de Beek from Ajax, and United have also confirmed the capture of Porto’s Alex Telles on a four-year deal, which includes an option to extend by a further 12 months.

The 27-year-old, who will likely prove a significant upgrade over Luke Shaw, is an attacking left-back who will provide another source of goals and creativity for the Red Devils.

The Brazilian contributed 13 goals and 12 assists in all competitions last season and has already notched two apiece in three games for Porto in this campaign. 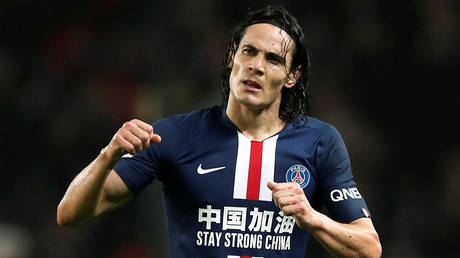