Close
Trending News
HomeSport‘Paid in full’: Dustin Poirier hints UFC deal struck for next fight – but is it against McGregor or Ferguson?

‘Paid in full’: Dustin Poirier hints UFC deal struck for next fight – but is it against McGregor or Ferguson?

‘Paid in full’: Dustin Poirier hints UFC deal struck for next fight – but is it against McGregor or Ferguson?

UFC lightweight contender Dustin Poirier has teased on social media that he is close to announcing his next fight but with both Conor McGregor and Tony Ferguson having expressed an interest in facing him, who will it be against?

More than a year after he lost his maiden world title fight against Khabib Nurmagomedov, Poirier got his title ambitions back on track in a ‘Fight of the Year’ candidate against Dan Hooker in June but the Louisiana native’s next fight has been shrouded in mystery after it appeared that the UFC suggested he had priced himself out of a top contender matchup with Tony Ferguson.

Both Poirier and Ferguson expressed their disappointment that the UFC and Poirier couldn’t come to a deal ahead of a fight which was proposed to take place on October 24, with Poirier standing his ground amid a larger debate regarding fighter pay which is currently a hot topic in MMA circles – but judging by a series of tweets issued by Poirier overnight, it seems as though the deadlock has been broken.

I’m gonna go out there and earn it in blood.

“I’m gonna go out there and earn it in blood,” Poirier wrote.

The comments received no further clarity as of Wednesday afternoon leading fight fans to speculate on the identity of his next opponent, after Conor McGregor had also proposed a December 12 rematch of their September 2014 first fight which was won by the Irishman via first-round TKO.

McGregor – who has vocally complained at the UFC’s apparent hesitancy to book him to fight – challenged Poirier to an ‘exhibition sparring match’ to take place in Dublin on the same date as the UFC’s traditionally stacked end of year card which, McGregor said, would benefit Poirier’s ‘Good Fight Foundation’ charity, as well as numerous good causes which McGregor described as being close to his heart.

UFC boss Dana White, however, holds McGregor’s promotional rights and poured cold water on the plan, saying that he had made an official offer to both Poirier and McGregor to complete inside the UFC cage at a date yet to be determined.

There has been no further movement, at least publicly, though Poirier announced on social media the following day that he had not received an official bout agreement contract from the UFC.

Poirier’s comments overnight suggest that the impasse between he and the UFC is over, but neither Ferguson nor McGregor have yet referenced any potential deal involving them.

This winner of this month’s title bout between champion Khabib Nurmagomedov and Justin Gaethje is likely to be challenged in their next fight by one of McGregor, Fergusons or Poirier but it remains to be seen which of these three championship caliber fighters will come out on top in this most high profile instance of musical chairs. 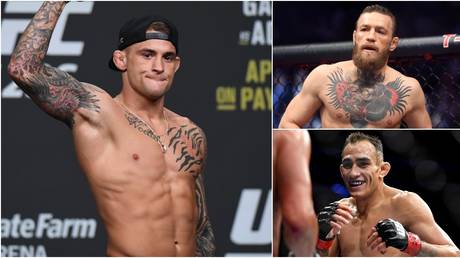