More than one million people are expected to arrive in Buenos Aires over the next two days to pay their respects to football icon Diego Maradona, who passed away on Wednesday after suffering a heart attack.

News of Maradona’s death has triggered a mass outpouring of grief amid the global footballing community, but nowhere more so than in his native Argentina, where their legendary number 10 was deified as one of the country’s greatest ever characters.

Argentine president Alberto Fernandez has offered the use of his executive office and mansion, Casa Rosada, as a venue for Maradona to lie in state after previously announcing a three-day period of mourning for their greatest ever footballer.

According to government officials, Maradona’s body will lie in a closed casket in “The Hall of Patriots” and mourners will be invited inside to file past and solemnly pay their respects.

As of early Thursday morning, reports from the Argentinian capital suggest that there were already thousands of grief-stricken fans lining up bid farewell to Maradona – with many of them were openly weeping.

Initial preparations for the wake began just two hours after Maradona’s death on Wednesday, with the stadiums of both Boca Juniors and Argentinos Juniors initially considered as potential hosts for the star’s wake before it was decided that the multi-day event would be held at government buildings.

The remains of Maradona arrived at the venue early on Thursday after an autopsy late Wednesday evening at a hospital morgue in San Fernando.

Maradona’s coffin, which is draped in an Argentina flag and a national team jersey bearing his famous number 10, will be on display all day Thursday, but this is under consideration to be extended given the wave of mourners making their way to the capital.

It was reported that Maradona most likely passed away peacefully in his sleep at some point between Tuesday night and Wednesday morning after he was last seen at around 11pm on Tuesday. 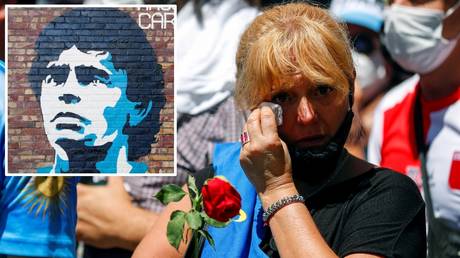