A broadcaster has earned a furious reaction after a female climber became embroiled in a second controversy involving close-up shots of her bottom during a competition in Moscow.

Graz-based star Johanna Farber angrily called for an end to “sexualizing women in sports” after a similar incident in June, urging people to condemn “disrespectful and upsetting” slow-motion clips and spend more time judging female athletes purely on their performance.

Now Farber has received a strong public apology from the International Federation of Sport Climbing (IFSC) following some questionable camerawork at the women’s boulder semifinal at the IFSC Climbing World Championships in Russia.

“The IFSC condemns the objectification of the human body and will take further action in order for it to stop, and to protect the athletes,” the federation thundered in a statement, adding further apologies to Austria Climbing, athletes and the entire climbing community.

IFSC President Marco Scolaris issued an even terser response after meeting “a representative of the Austrian team”.

“How many times will things have to be done wrong before we learn how to do them right?” he asked.

That is likely to be a reference to the previous scandal at the World Cup in Innsbruck, when the Austrian Broadcasting Corporation responded: “We acknowledge that, for a brief moment, we chose to display the sport of climbing in the wrong way.

“We commit ourselves to keep working for a fair, equal and better representation of women’s sports.”

Farber was said to have blasted on Instagram at the time: “I’m an athlete and here to show my best performance.

“To be honest, I do really feel so embarrassed to know that thousands of people saw this.”

The video of the men’s and women’s Boulder semi-finals in Innsbruck has been temporarily removed from our YouTube channel.

It will be edited and re-uploaded as soon as possible.#InnsbruckWC

This is far from the first accusation of sexualization of female competitors this year. Earlier this summer, Norway’s women’s beach handball team copped a fine for wearing shorts instead of bikini bottoms, launching a row that included pop star Pink offering to pay their penalty for them.

“For this disrespectful incident to happen once again to the same athlete is very disappointing at a time when more eyes are on the sport than ever before and more women and girls are being introduced to climbing,” said former GB climber Natalie Berry, speaking to Sky News.

“While the intentions of the camera operators and editors may not be to sexualize an athlete and instead to focus on a visually interesting chalky handprint, in the context of the sexualization of women in sport throughout history, it’s quite simply inappropriate.”

This is incredibly shocking and abusive to the climber who was simply doing her job and women in general. IFS is responsible to promote diversity without fear of abuse. An apology feels weak, I’d like to know if IFS is taking further action?

They apologized for something that clearly didnt have any intend of abuse. What do you want them to do? Fire the entire staff?

The saga received a mixed response on social media in June. “This is incredibly shocking and abusive to the climber who was simply doing her job and women in general,” said one shocked fan.

“[The federation] is responsible for promoting diversity without fear of abuse. An apology feels weak. I’d like to know if [it] is taking further action?”

Another replied: “They apologized for something that clearly didn’t have any intention of abuse. What do you want them to do? Fire the entire staff?”

There were two slow-motion close-up replays of one of the climbers’ behind (and nothing else), while she was cleaning the holds.

Thanks @ifsclimbing for editing it out, I’m happy I won’t have to see that when I’ll watch the replay.

When asked for details of the World Cup footage, one viewer claimed: “There were two slow-motion close-up replays of one of the climber’s behinds – and nothing else – while she was cleaning the holds.”

A reader responded: “Disrespectful indeed. Thanks [IFSC] for editing it out. I’m happy I won’t have to see that when I’ll watch the replay.”

Climbing made its debut at the Olympics in the Tokyo edition earlier this year. 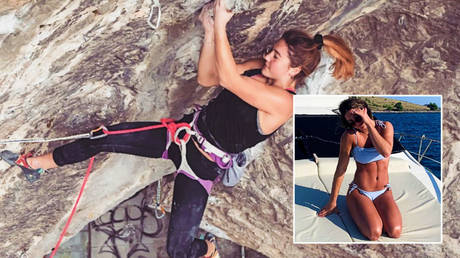 WATCH Lava ‘destroy everything it...