WBC heavyweight champion Tyson Fury was among the leading figures impressed by veteran underdog Alexander Povetkin’s brutal knockout of Dillian Whyte, nodding to the new interim title holder’s age while telling him to be “proud”.

Durable Povetkin’s only knockout loss of his two career defeats had come against IBF, WBA and IBO champion Anthony Joshua two years ago, but the 39-fight Russian entered as a heavy underdog against fellow Joshua victim Whyte.

The odds-on favorite had been hoping to set up a title challenge against Joshua or Fury and looked on his way to a convincing win at promoter Eddie Hearn’s “Matchroom Square Garden” on the Fight Camp 4 card, twice sending the 40-year-old to the canvas in the fourth round.

“The Body Snatcher” was caught cold by Povetkin with a thunderous uppercut during the round that followed, requiring attention in the ring after a shot that only the most prophetic of fans would have seen coming during the early stages of the scrap.

“Forty and proud,” tweeted Fury, applauding the former WBA titleholder who will be 41 in his next fight, which is likely to be a rematch with Whyte.

Compatriot Dereck Chisora, who was knocked out by Whyte in a title fight in 2018 and has previously called out Povetkin, puffed out his cheeks and said: “All I’m saying is, age is just a number.”

Chisora turned the camera to promoter and former opponent David Haye, who is 39 but retired two years ago, and declared: “David’s coming out of retirement now.”

He then filmed himself in front of a screen showing Hearn discussing Povetkin’s win, adding: “Eddie, shut the f*ck up.”

Povetkin has been seen as a hard-hitting gatekeeper to the pinnacle of the sport, beating contenders including Hughie Fury and David Price after taking his only other defeat in 2013, when he lost a unanimous decision to Wladimir Klitschko in a bid to become unified champion.

Wow where did that come from! Whyte dominating – and then boom from Povetkin! KO 💥😮 #WhytePovetkin pic.twitter.com/D6Oqxhk7cv

Drama. Huge left uppercut up the middle and Alexander Povetkin knocks out Dillian Whyte 30 seconds into round five. Out. Cold.
There are only 80 of us here but there was a stunned silence.
The punch he did not see coming… pic.twitter.com/gGXtZY5QWX

“I didn’t think I would finish the fight like that but I was pretty confident,” he said, adding that the winning shot had “probably” been the best of his career.

“Yes, I went down in the fourth round, but it was OK. It wasn’t like I suffered too much damage.

“I had been watching his fights and had seen that he was missing uppercuts from the left and right, so in my training I worked on those shots.”

Hearn admitted that he had felt the fight was “over, virtually” before Povetkin produced his masterstroke.

“I couldn’t believe it,” he confessed.

“When the punch landed, I felt like I was in some dream.

“Povetkin started well. I felt that Whyte was just measuring him up. Two heavy knockdowns – I and a lot of people felt that it was over.

Whyte had avoided interviews in the ring after the concussive conclusion to the fight but had been heard asking Hearn about the rematch.

“I got clocked – it’s heavyweight boxing.

“He dipped low, I shoot the hook, he came with the uppercut and that was it.

“We’re going to try to exercise the rematch…by the end of the year. I’ll have a couple weeks’ rest and get straight back in the gym. When he dips low, now I’ll realize he’ll come.”

Joshua ended Povetkin’s challenge in the seventh round at Wembley Stadium in September 2018.

“At the minute, it’s everything,” he said.

“[People say] ‘Dillian’s lost – you’re rubbish.’ But as time goes on… he’ll be able to look back and say that was a great lesson.” 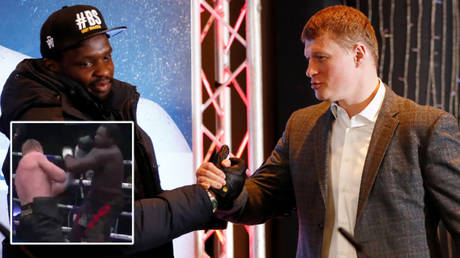