‘Our wish is that you die’: CHILLING messages to tennis ace Djokovic daubed on street walls after World No.1’s coronavius fiasco

‘Our wish is that you die’: CHILLING messages to tennis ace Djokovic daubed on street walls after World No.1’s coronavius fiasco

Messages wishing Novak Djokovic death have been daubed on walls on the streets of Croatia, where the second leg of the world number one’s doomed Adria Tour took place before a string of participants were diagnosed with COVID-19.

The grim graffiti was visible in the city of Split, compounding a wretched week for Djokovic in which the previously carefree tennis great has been diagnosed with COVID-19 and issued a public aplogy after several of the participants at his controversial Adria Tour tournament also tested positive.

Croatian star Borna Coric was one of four players to announce they were infected in the aftermath of the events in Belgrade and Zadar, where no precautions were taken to limit crowds or prevent the possible spread of the potentially deadly virus.

“Djokovic, die,” said the message. “Our wish is that you die. Greetings from Split. Die.”

Djokovic has endured a chastening fall from grace since his initial insistence that the virus had barely registered in the region and that the tournament was following government guidelines.

Fans were shocked to see the outspoken vaccination skeptic playing football and posing at press conferences in close proximity to his invited guests, partying in a nightclub, hugging a ballboy and entertaining a packed arena of 4,000 people by dancing at a piano.

His coach – legendary Croatian player Goran Ivanisevic – became the latest figure from the tournament to test positive on Friday.

Ivanisevic, who had passionately defended Djokovic’s behavior, announced: “Unfortunately after two negative tests in the last 10 days, I have just found out I have tested positive for COVID-19. I feel good and don’t have any symptoms.”

Explica quoted Djokovic’s mother, who has also seen the tournament fiercely criticized by leading tennis figures, as saying: “It is horrible and scary what they are writing about Novak, but we are used to it.”

Following his test result, Djokovic said: “I am so deeply sorry our tournament has caused harm.

“Everything the organizers and I did the past month, we did with a pure heart and sincere intentions.

“We believed the tournament met all health protocols and the health of our region seemed in good condition, to finally unite people for philanthropic reasons.

“We were wrong and it was too soon. I can’t express enough how sorry I am for this and every case of infection.” 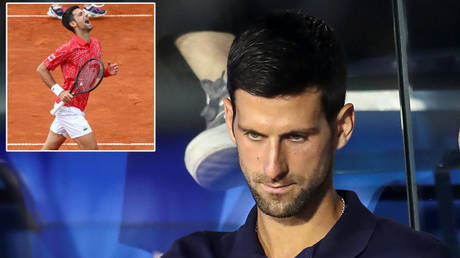