Olympic and world figure skating champ Alina Zagitova has faced criticism for her new presenting role on Russian TV show ‘Ice Age’ – although co-host Alexey Yagudin has defended her after earning fury himself over an odd joke.

Zagitova continued her career as a TV host in Saturday’s episode of the new series of the reality show, which she has been training intensely for while deciding to put her sensational sporting exploits on ice for the time being.

Experienced co-host and former champion Alexey Yagudin hit back after the 18-year-old’s skills in her new role received a barrage of comments on social media, although the four-time world champion has also courted disdain after some viewers said he had made a tasteless sexual joke in a previous episode.

“There is chemistry between us,” 2002 Olympic gold medalist Yagudin insisted to Gazeta.ru.

“Although they say that the first pancake is lumpy, our pancake was not lumpy. It was a nice, crispy pancake.

“Ice is melting under Alina. She just goes out and charms everyone. Alina is now making a breakthrough – each of her [recordings] are getting better and better.”

Long-serving Yagudin admitted that the start of the project had been “very difficult” because of Zagitova’s inexperience but emphasized that he was impressed with her progress.

When a viewer took to his Instagram page to ask him why Zagitova had been given the presenting role and describe her performance as “restrained”, “very pretentious” and painful to watch and listen to, he replied: “You better criticize yourself.”

Having previously admitted that her motivation to continue competitive ice skating had waned, Zagitova rejected the opportunity to take part in a test skate for the Russian national team last month in order to focus on her small screen ambitions.

“Alina is not easy in front of the camera yet but she tries very hard,” reflected the show’s producer, Ilya Averbukh.

“She has started working with vocal teachers. I am sure that with each program, with each new release, she will lead the show better. I think that now our task is to support Alina.”

Others were less forgiving, including a commentator who was said to have claimed that Zagitova’s presenting “doesn’t fit at all” and was “to put it mildly, uncomfortable and dreary.”

She reportedly became visibly confused during a section in which she asked a presenter if they knew about components of figure skating.

When they lampooned their ignorance by asking if Zagitova knew what pizza was, former ice dancer Margarita Drobiazko teased her for being more familiar with eating fruit in a joke that seemed to fall flat with the newcomer.

Audiences on a gossip channel were also said to have slated Zagitova for behaving with “no emotions” and being unable to “even connect two words”, calling for her replacement by a “normal presenter”.

Yagudin was accused of impeding and offending Zagitova in a bizarre sequence on the show two weeks ago.

After Zagitova reacted sympathetically to the sight of bruises on a hard-training dancer’s knees, Yagudin interrupted the chat to insinuate that the marks could have been caused by sex, adding that his new presenting partner would be too young to be aware of that risk.

Fans of the show on Twitter reacted by calling the 40-year-old “creepy” and “disgusting” while dismissing his remarks as “completely inappropriate” and offering support to Zagitova.

“Poor Alina,” said one angry supporter. “It is known she’s naturally shy so she’s obviously trying her best with this show – and now this.”

literally what would possess him to say this

seriously this is so disgusting. How much time women have to deal with stupidities like this? Poor Alina 🙁

“Beyond the fact that it’s weird, who gave him the right to talk about this woman’s sex life?”

Figure skating columnist Elena Rodina told InfoReactor: “I really love high-quality humor – but this is not that. 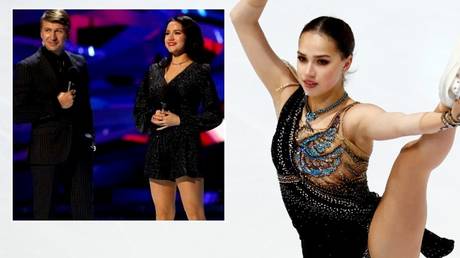