OUCH! Cyclist hospitalized with body covered in SPIKES after agonizing crash into bed of CACTI (VIDEO)

OUCH! Cyclist hospitalized with body covered in SPIKES after agonizing crash into bed of CACTI (VIDEO)

An amateur cyclist in Argentina had to be taken to hospital to have thousands of spikes pulled from his body after hitting a pothole in a pack and plunging into a giant prickly plant in a crash that left him struggling to walk.

Locals tried to pull parts of the pile of cacti out of Diego Moreno’s skin after the cyclist flew into the thorns during a race in Buenos Aires, risking his sight as he hurtled off the road.

He needed urgent hospital treatment but escaped life-threatening injuries after failing to spot what he described as a “crater” in a freak accident that was caught on camera.

“We were in a group of three cyclists,” shaken Moreno is said to have told local media.

He had a bicycle wreck into a bunch of cacti… pic.twitter.com/LoubENpcRo

“I was the last one in line. I didn’t see a hole in the asphalt and I fell into it.

“Thank god I was wearing a helmet and glasses and I didn’t hurt my face and head. Because of the thorns, I could have gone blind.”

More than 1.4 million people watched one version of a video showing Moreno gingerly stepping off the kerb while a group unsuccessfully tried to remove clumps of the cacti from his statuesque limbs.

“I backed into one of those playing golf in the desert a few years ago,” said one sympathetic viewer on Twitter.

That has to be so painful

Oh man. I backed into one of those playing golf in the desert a few years ago. Got me right in the arss. Sadly each quill has a barbed hook. This guy got torn up when it was all removed 😩

A jumping cholla got me once. Yikes…he’s going to hurt for a long while.

“Got me right in the ass. Sadly, each quill has a barbed hook. This guy got torn up when it was all removed.”

Viewers claiming to have knowledge of the area speculated that the plant could have been hanging chain cholla – a cactus native to the Mexico and south-western region of the US.

“A jumping cholla got me once,” wrote one. “Yikes. He’s going to hurt for a long while.”

Another warned: “If it’s cholla, count on the needles being like little fish hooks. Not easy to pull out at all – from one who knows.” 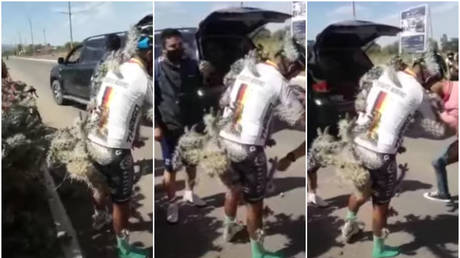