Social justice warrior Gary Lineker has applauded Pep Guardiola and told the English Football Association (FA) not to intervene amid a row over the Manchester City boss using his touchline attire to further back a migrant project.

Two-time Champions League winner Guardiola was again spotted wearing a hoodie branded with the logo of Open Arms on Sunday, showing his support for the operation behind a migrant-carrying boat during the game and in his post-match interviews as City beat Arsenal 1-0 in an English Premier League win watched by millions worldwide.

Guardiola is said to have donated around $158,000 of his $20 million annual salary to the boat, which carries out search-and-rescue missions in support of migrants, many of whom are attempting to flee North Africa for Europe.

The group launched a fundraising appeal after being impounded by Italian authorities for docking in a Sicilian port with 218 migrants on board two years ago.

No they won’t, the BBC has no jurisdiction over what football managers wear. The FA might complain, but I hope they don’t as It’s an humanitarian issue that deserves support. Well played, Pep. 👍🏻 https://t.co/RhSWH2nlNx

Give it a rest Gary

Ex-England striker Lineker, who publicly declared his desire to let a refugee stay in his mansion at the end of last year, reacted testily to a suggestion on social media that the BBC could ask Guardiola not to wear the jumper on screen in a bid to avoid politics.

“The BBC has no jurisdiction over what football managers wear,” the pundit helpfully pointed out to his Twitter following of more than 7.8 million.

“The FA might complain but I hope they don’t as it’s an humanitarian issue that deserves support. Well played, Pep.”

I have new respect for Pep now, well done

Strange, never seen him wearing any t-shirt regarding human rights in UAE

It may be a humanitarian issue but any illegal immigration works against the management of societies. Highly irresponsible to promote such efforts,even though understandable of the people, there are legal avenues for logical reasons. Elites like to appear righteous on such issues

While Lineker and Guardiola received ample praise from some supporters, others claimed that the broadcaster was repeatedly desperate to appear morally superior and accused the revered coach of hypocrisy.

Guardiola was again challenged over his continued willingness to work with Manchester City’s owners under the leadership of Sheikh Mansour, a member of the Abu Dhabi royal family and deputy president of the United Arab Emirates.

Amnesty International has said that the owners bought Manchester City as part of an attempt to “sportswash” the country’s often-questioned human rights record.

Hes wearing a hoodie, endorsing a charity? Hes using his ‘power’s within the media to do good and raise awareness. Who cares if hes doing it to look good or not? The end result is still the same…

Yet he’s employed by people with some serious human rights questions to answer….

Not sure his bosses will be happy with this..with their well known human rights issues..call me cynical but is it just good PR for them 🤔

When he was asked about the issue after wearing a symbol in support of a political cause in his homeland of Spain in 2018, Guardiola reportedly replied: “Every country decides the way they want to live for themselves.

“If [someone] decides to live in that [country], it is what it is. I am in a country with democracy installed since years ago and try to protect that situation.”

Guardiola accepted a fine of more than $28,000 for wearing the small yellow ribbon in an FA Cup match in support of the Catalan independence movement.

Hypocrisy at its finest

Preferred it when he wore Stone Island jumpers

The two-time Premier League winner had vowed to continue wearing the ribbon and insisted that it was not part of a political message, which the FA deemed in breach of its rules.

At the time, the governing body said Guardiola had admitted the charge and been “warned as to his future conduct” after breaking its “kit and advertising regulation.”

City look almost certain to win the Premier League after racing ten points clear at the top of the table. They face German Bundesliga side Borussia Monchengladbach in their first knockout match of this season’s Champions League tomorrow. 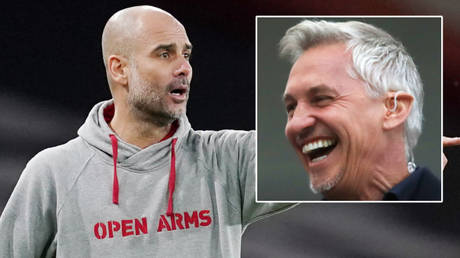