It may have taken him more than 40 attempts, but Cristiano Ronaldo has finally scored his first free-kick goal for Juventus – more than TWO YEARS after leaving Real Madrid for the Italian giants.

The Portuguese great curled a majestic strike into the top corner just past the hour mark in his side’s derby with local rivals Torino as he scored his side’s third goal in a 4-1 victory for “The Old Lady.”

Incredibly, the goal came broke a set piece drought which had extended all the way to his spell with Real Madrid. By RT Sport’s reckoning, the last free kick goal Ronaldo scored was his late equalizer for Portugal against against Spain in their 2018 World Cup meeting in Sochi.

Ronaldo with the freekick🐐🐐🐐🐐🐐🐐 pic.twitter.com/GfyjlE8hlU

Cristiano Ronaldo’s free-kicks for Juventus by numbers, in the league and Champions League:

Only took him 2 years

This time around, Ronaldo ditched his usual method of striking the ball with his laces in favor of applying a more delicate bend to the ball – and he will be happy with the results, as the strike was pivotal in securing the points for a Juve side looking to extend their lead over second-placed Lazio.

Ronaldo’s barren spell from the dead ball spot is even more remarkable when you consider that, despite scoring just three in the past three years (by our count at least), he remains the top scorer of free kicks among active players with 55.

Coming up just behind him? Yep, you’ve guessed it – Lionel Messi has 52. 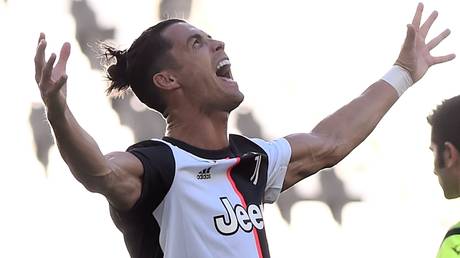