Bellator MMA veteran Sergey Kharitonov has urged fellow combat sports professionals to restrict the use of their skills to competitions, showing the brutal damage done in an assault by fellow Russian fighter Adam Yandiev.

Kharitonov and Yandiev came to blows on the sidelines of an event at the Luzhniki complex in Moscow on Friday night, after UFC middleweight Yandiev was reminded of an alleged debt that he owes to 40-year-old heavyweight Kharitonov.

Yandiev was seen launching a vicious two-punch combination at an unsuspecting Kharitonov, who responded by stumbling backwards before attempting to grapple with his attacker.

The pair were eventually separated by police and onlookers, but not before Yandiev had done significant damage to the former M-1 and Strikeforce competitor.

Kharitonov was taken to hospital, where he was diagnosed with a fractured orbital bone around his right eye as well as a broken nose and concussion.

The veteran 250lbs brawler is said to require surgery after the attack, which he has suggested was carried out with the help of a knuckleduster. Those were claims also made by Kharitonov’s friend, 41-year-old businessman and amateur MMA fighter Ruslan Abdo, who was seen being set upon by UFC fighter Yandiev earlier in the evening.

Taking to Instagram, Kharitonov issued an update on his condition and repeated an earlier plea for combat sports professionals to confine their skills to competitions.

“For sportsmen this is a normal condition after a fight. Fractures, concussion, cuts, etc. I never lose heart and only move forward, confident that my main victories are ahead of me,” Kharitonov wrote.

“I’m out for an unknown period, but I’m sure everything will heal in half a year at least I can return.

“Sportsmen, train and compete only in competitions! Good health to all! Only forwards!”

Over the weekend, Kharitonov confirmed that his bitter feud with former friend Yandiev had begun over an alleged debt owed by the latter, stemming for a training camp in Thailand which Kharitonov claims he financed.

Reports in the Russian press put the sum owed at 2 million rubles (around $25,000), but Kharitonov has since alleged that the amount was “much higher”.

Meanwhile, Ingushetia-born fighter Yandiev – who boasts a 9-1 professional MMA record, and whose only defeat came in his sole octagon appearance to date back in 2018 in Moscow – has vowed to set the record straight over his dispute with Kharitonov and denied he had used a knuckleduster in the attack.

“Someone said I had a knuckleduster. Look at my hands, at the hematoma and swelling,” Yandiev said in a post shared with his 1 million followers on Instagram.

Reports stated that Yandiev – nicknamed ‘Beard’ – had been detained overnight on Sunday but had declined to explain his actions to police. He is reportedly facing two criminal cases.

The battered and bruised Kharitonov is one of the best-known combat sports characters in his homeland.

A veteran of more than 40 professional MMA contests, he has wins to his name in promotions including Bellator, M-1, Strikeforce and K-1.

Kharitonov made his boxing debut in September, walking to the ring with a bear before knocking out 47-year-old British veteran Danny Williams.

He has also made headlines for calling out heavyweight boxing legend Mike Tyson, as well as for outlandish statements on the coronavirus pandemic.

Kharitonov’s conflict with Yandiev came less than a week after he knocked out England’s Oli Thompson in the first round of their Parus Fight Championship MMA contest in Dubai. 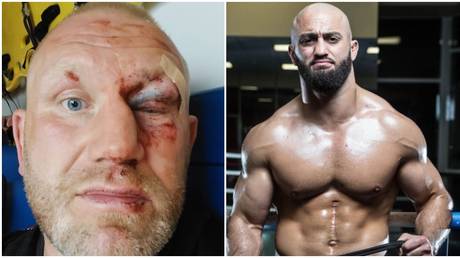