Spanish tennis legend Rafael Nadal has proved again that he is the real “king of clay,” after he confidently outplayed Argentinian rival Diego Schwartzman in the semifinal to seal a place in the French Open final.

Nadal scooped three sets 6-3, 6-3, 7-6 to record a well-deserved victory and advance to the final, where he will face the winner of the tie between Novak Djokovic and Stefanos Tsitsipas.

READ MORE: ‘He’s been doing this for a long time’: Carreño Busta lambasts Djokovic for calling medical time-outs when game gets tough

The Spaniard struggled a bit on his serve in the opening set, allowing his lower-ranked opponent to break him, but his solid footwork and powerful backhand shots helped him not only return the break, but extend his lead to easily win the first set 6-3.

Nadal continued dictating the game, bombarding his rival with killer shots that Schwartzman failed to return on most occasions.

The 28-year-old Argentinian, who’d knocked out the newly crowned US Open champion, Dominic Thiem, on his way to the semifinal, did his best to reverse the course of the game, but his attempts to break Nadal were in vain.

The 34-year-old Spaniard, who is eying his 13th French Open crown, easily won the second set 6-3.

The third set saw an uncompromising battle between the two players in which none wanted to surrender.

Schwartzman revived the intrigue by winning two games on the Spaniard’s serve and making a stunning comeback to tie the game at 4-4.

The fierce exchange of shots continued and the winner was determined by a tie-break, in which the Spaniard got the upper hand and secured his ticket for the final.

Nadal, who hasn’t yet dropped a set during a two-week tournament, will fight for a record-breaking 13th French Open title on Sunday. 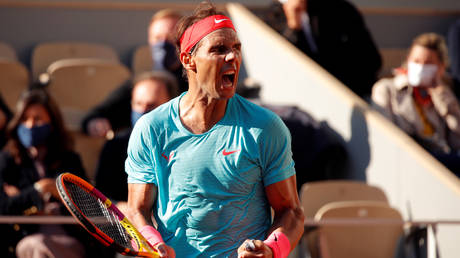