Olympic wrestling champ who proclaimed ‘I freaking love living in the USA!’ is hailed by UFC boss Dana White (VIDEO)

Olympic wrestling champ who proclaimed ‘I freaking love living in the USA!’ is hailed by UFC boss Dana White (VIDEO)

Mensah-Stock, 28, added to America’s gold medal haul in Tokyo with victory in the 68kg women’s final over Blessing Oborududu of Nigeria this week, becoming only the second US woman ever to win an Olympic wrestling title.

While that achievement has made headlines, the interview which followed Mensah-Stock’s success has arguably gained even more traction by showcasing the wrestling star’s larger-than-life personality.

“I love representing the US. I freaking love living there,” beamed the wrestler, draped in the Stars and Stripes, when she was asked how it felt to appear for her homeland.

“I’m so happy I get to represent USA! I love it!” added Mensah-Stock, who was born in Chicago to a mother from Illinois and a father who hailed from Ghana.

The clip soon went viral and was picked up by UFC boss White, who shared it with his 5.6 million followers.

“Congratulations Tamyra Stock for being the first black woman to win a wrestling gold medal. I love your energy, I love your positivity, and we couldn’t have a better representative of our country,” wrote White.

Congratulations Tamyra Stock for being the first black woman to win a wrestling gold medal. I love your energy, I love your positivity, and we couldn’t have a better representative of our country. pic.twitter.com/NE2S2tpBe0

“Most of all I love how excited and honored she is the represent USA. Hopefully this is just the beginning for her,” added another person.

“This is how you represent,” said another admirer.

Elsewhere, some claimed it was a blatant sales pitch from the enamored White, with one reply reading: “Fastest recruitment I’ve ever seen! Get em all Dana!”

Some in the US media have similarly been in thrall to Mensah-Stock, with Fox News claiming she had “captured the attention of citizens who’ve been beaten over the head by social justice warriors who’ve sucked the fun out of the Games.”

Mensah-Stock took up wrestling in 10th grade while in Katy, Texas, after being encouraged by her twin sister.

Tragically, their father died in a car accident on the way home from one of her wrestling events, leading Mensah-Stock to question whether she could continue.

But battle on she did, continuing a path which was disrupted by missing out on the Rio Games in 2016 but not derailed entirely, as she rose to the top of the podium in Tokyo.

In keeping with her bubbly-but-humble demeanor, Mensah-Stock said she would be using some of the financial gains from her gold medal success to set her mom up “with a food truck.”

“And I told her five years ago, ‘Alright mommy, I’ll get you your food truck, but you gotta be responsible.

“So my mom’s gettin’ her food truck! She’s gonna have her little cooking business. She can cook really, really, really well. Barbecue!” 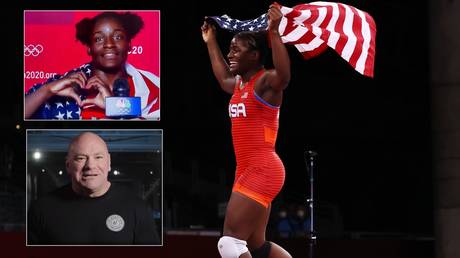