Prominent Russian gymnast Karolina Sevastyanova and Anna Kasterova, the wife of NHL star Evgeni Malkin, have been included in the list of Russia’s 100 most beautiful women by men’s magazine Maxim.

The Russian edition of the magazine conducts an online contest asking its followers to vote for the country’s most beautiful women.

Each day, Maxim shares pictures of the Russian female stars chosen by its editors and calls on its readers to cast their vote for their favorite candidate.

Olympic champion Sevastyanova and former sports journalist Kasterova were among the beauties selected for the contest.

“While the husband of the former sports presenter helps to fuel the Pittsburgh Penguins, Anna is trying to hold as many training sessions as him. And then she impresses us with her ideal body,” the magazine captioned Kasterova’s picture.

Malkin got engaged to Kasterova in November 2015 and six months later the couple welcomed their son Nikita.

Sevastyanova is famous in Russia not only for her sports achievements, but also for her active social media accounts, where she shares bikini snaps from luxurious resorts.

She retired from professional sports after scooping gold in the group event at the 2012 Olympics in London. The gymnast was named the most beautiful female athlete in the Olympics that year by residents of the Commonwealth of Independent States who took part in a poll.

Several years ago, she was rumored to be dating Russian ice hockey star Alexander Ovechkin. His break-up with tennis player Maria Kirilenko was attributed to Sevatsyanova, as Kirilenko called off their engagement after pictures Ovechkin spending time with the former gymnast emerged on social media. 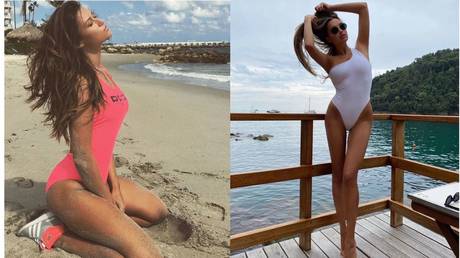