Ole’s staying at the wheel! Manchester United boss Solskjaer inks new deal to tie him to Old Trafford until 2024

Ole’s staying at the wheel! Manchester United boss Solskjaer inks new deal to tie him to Old Trafford until 2024

Manchester United have shown their faith in boss Ole Gunnar Solskjaer by rewarding the Norwegian with a new contract which will keep him at the club until at least 2024.

Solskjaer has been in the United hot seat since he was appointed as interim manager following Jose Mourinho’s sacking in December 2018 – later being handed a permanent deal after impressing in his first few months in the role, winning 14 of his first 19 games in charge.

He was credited with steadying the ship at Old Trafford following the unimpressive regimes of Mourinho, Louis Van Gaal and David Moyes, and guided the club to a third-placed finish in his first full Premier League season.

He finished second in the league last season, a full 15 points behind runaway winners Manchester City, and also led the Red Devils to the Europa League Final, where they were defeated on penalties by LaLiga outfit Villarreal.

Our past. Our present. 𝗢𝘂𝗿 𝗳𝘂𝘁𝘂𝗿𝗲.

✍🇳🇴 We are delighted to announce that Ole has signed a new deal with the club! #MUFC

“Everyone knows the feeling I have for this club and I am delighted to have signed this new contract,” said Solskjaer after finalizing his new deal.

“It is an exciting time for Manchester United; we have built a squad with a good balance of youth and experienced players that are hungry for success.

“I have a fantastic coaching team around me and we are all ready to take that next step on our journey.

Manchester United wants to be winning the biggest and best trophies and that’s what we are all striving for. We have improved, both on and off the pitch, and that will continue over the coming seasons.

“I can’t wait to get out in front of a packed Old Trafford and get this campaign started.”

Solskajer’s enthusiasm was matched by United’s outgoing executive chairman Ed Woodward, who credited the club’s boss with being instrumental in establishing a new culture within the famous club.

“Ole and his staff have worked tirelessly putting the foundations in place for long-term success on the pitch,” he said.

“The results of that have become increasingly visible over the past two seasons and we are all looking forward to seeing this exciting team develop further in the years ahead.

“What is especially pleasing is the way this progress has been achieved with a blend of young, homegrown talent and top-class recruits, playing attacking football in the best traditions of Manchester United. We are more confident than ever that, under Ole’s leadership, we are heading in the right direction.”

Woodward’s endorsement of Solskjaer’s reign doesn’t appear to be hollow. The club, who are the biggest spenders in European football across the past three seasons, are again preparing for a massive summer outlay to finance new signings – with the $100 million deal for England star Jadon Sancho already confirmed.

🗞 Paris Saint-Germain fans put up an anti-Paul Pogba banner outside the Parc des Princes – “Pogba you should listen to your mother, she doesn’t want you here. Neither do we!” [@RMCsport via @GFFN] pic.twitter.com/inDsdfQs9i

The club also appear close to the capture of Real Madrid’s French international defender Raphael Varane and have also been linked in the press with an ambitious move for Bayern Munich’s Leon Goretzka.

One player who appears detined to leave, however, is the club’s record signing, Paul Pogba. Reports suggest that United are braced for an offer for the France midfielder from Paris Saint-Germain – with any agreement likely to be a cut-price one, given that his contract is due to expire in a year’s time.

That move might well be complicated by protests outside the club’s Parc des Princes stadium in Paris, though, where some fans have made clear their objection to the potential transfer after comments made by Pogba about PSG in the past, declaring his support for rivals Marseilles.

“Pogba, you should listen to your mother –she doesn’t want you here. Neither do we!” read one banner visible this week outside of the stadium. 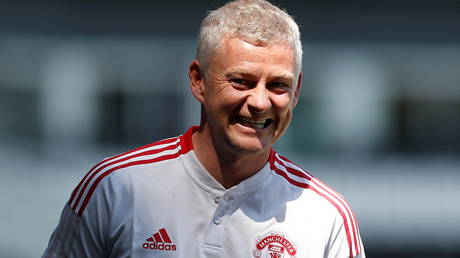