Local media are reporting that Manchester United’s patience with under-fire boss Ole Gunnar Solskjaer is wearing thin and that the club’s hierarchy are giving serious consideration to imminently removing him from his post.

The Norwegian is facing the biggest crisis of his brief managerial career after his side were humiliated at home by Liverpool in a despondent showing at Old Trafford on Sunday afternoon, with each of the five goals plundered by Jurgen Klopp’s rampant side amping up the pressure even further on the under-pressure Solksjaer.

In the 24 or so hours which have passed since, speculation has reached fever pitch that Sunday’s annihilation might prove a bridge too far for the United hierarchy – with the Manchester Evening News reporting on Monday afternoon that the club’s leadership are seriously considering cutting their losses and severing ties with Solskjaer before Saturday’s clash with Tottenham. The publication also reports that the club have refused to comment when pressed on the issue.

The increased speculation as to Solksjaer’s future comes amid a slump in form which has seen them lose 5 of their past 9 games in all competition – and despite outwardly projecting that he would be given time to steady the ship, the manner of the capitulation at the hands of Liverpool on Sunday has led to crisis talks in the corridors of power at Old Trafford.

Decision on Solskjær’s future still to be made. Conversations on. #Solskjaer pic.twitter.com/YLfiCs9Srp

Football insider Fabrizio Romano added further color to the saga on Monday by reporting that the club’s managing director Richard Arnold has cleared his schedule for showdown talks with the club’s owners, the Glazer family, to discuss Solksjaer’s position.

However, he adds that no decision has as of yet been made.

The amped-up speculation to Solskjaer’s future also quite neatly coincides with media reports which state that former Inter Milan and Chelsea boss Antonio Conte has outwardly expressed an interest in succeeding the Norwegian in the Old Trafford hot seat. Zinedine Zidance would also likely be a candidate if and when the position becomes available.

Additional reporting suggests that Solskjaer’s woes aren’t solely down to the recent poor results, but also a perceived inability to form a cohesive unit with his galaxy of attacking stars.

ESPN have stated that club officials are unimpressed by the floundering partnership of Cristiano Ronaldo and Mason Greenwood in the attacking third, as the club’s future (Greenwood) struggles to adapt to the vestiges of its past in Ronaldo.

They also write that several players have noted a reluctance from both Ronaldo and Greenwood to pass to one another in attacking situations – a scenario which might just neatly sum up the problems inherently obvious at the club, with Ronaldo representing the glory days of old and Greenwood the club’s brave new future.

But as United attempt to bridge the gap from their prior dominance of English football to today, they are finding out that the club’s current identity is entirely incongruous to that team Solskjaer dragged to a Champions League title in 1999, and that went on to dominate the Premier League for much of the next decade.

And it looks like it could well cost the Norwegian his job. 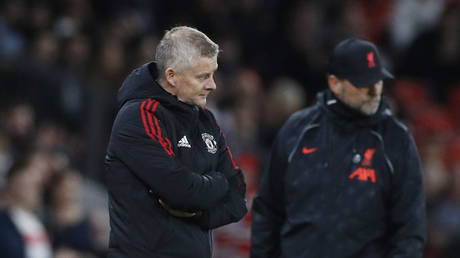 Relive classic Fortnite with this...