Bryson DeChambeau has been one of the stars of COVID-era golf, and the beefy American unwittingly found himself in the news again after accidentally snapping his driver during the Day 1 of the PGA Championship in San Francisco.

DeChambeau unleashed his driving power on the first, second and fourth holes as he struck unerringly with the driver from the tee.

Then, on the par-4 seventh, things went awry. There was a cracking sound as he struck his tee shot, then, when he leant forward on the club to pick up his tee, the club snapped.

“That was weird! Swinging too hard. I guess it’s all those swings I put in!” DeChambeau laughed as he left the tee.

Oops! Bryson DeChambeau broke his driver in Round 1 when leaning on it to pick up his tee after his tee shot. pic.twitter.com/XUHmTxOrHo

DeChambeau picked up the story at the conclusion of his round, “The ball did not react proper. I hit it out to the right, felt like I drew it and the ball went to the right and spun up like crazy. I’m like, that’s not normal.

“I just went over to pick up my tee, leaned on it a little, and the thing just, see ya later!”

Because the club was not damaged as a result of abuse from the player, DeChambeau was permitted the use of a replacement driver and, after a member of his team fetched a new club, the American continued his round and registered a two-under-par 68 for the round to finish the day three shots off the lead.

He even registered his third birdie of the day just two holes later after smashing a drive 327 yards with his new club.

“Being able to switch it out and put a new one right back in play in a major championship and stripe one on 9, that’s pretty impressive,” he said.

DeChambeau caught the attention of the golfing world when he emerged from quarantine 20 pounds heavier and playing much more aggressively. He used his new playing style to claim a tournament win at the Rocket Mortgage Classic, but has also found himself in some tricky situations during tournaments.

But, despite his unexpected equipment failure, DeChambeau took it all in his stride and even paid tribute to his trusty old driver, which has since been consigned to the trash.

“It’s through wear and tear,” he explained to reporters after his round.

“This material isn’t going to last forever, no matter how strong you make it. But that thing lasted over a year swinging it over 200-mile-an-hour ball speeds. 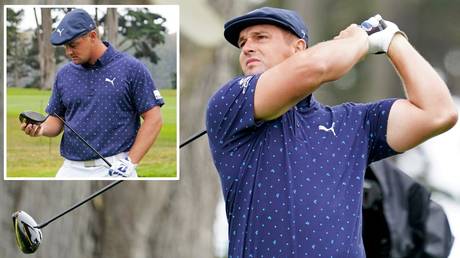 Preston set to be added to local l...