Favorite Remco Evenepoel has reportedly survived a horrendous crash during a section renowned for its speed at the prestigious Giro di Lombardia on Saturday, leaving fans who watched his plunge shocked and fearful for the star.

Television commentators were horrified to see the 20-year-old lose control of his bike on a vertiginous bridge before hurtling off the side and down the ravine as he entered the final 31 miles of the high-profile Italian race.

The hugely popular prospect was quickly attended to by an ambulance as shaken viewers anxiously waited for news of his wellbeing after he hurtled over the bridge barrier in the commune of Sormano.

Belgian Evenepoel was said to be “alive and conscious” by Italian television station RAI, although his Quick-Step team did not provide an immediate update on his condition while asking fans not to speculate.

“Remco Evenepoel has been tended to by the doctors and has now been taken to the hospital with the ambulance,” a team statement said.

“Thanks to everyone who sent their thoughts and best wishes…it means a lot to us.

“When we have an update, we will share it with you.”

Remco Evenepoel is speaking with the doctor and out of the ravine after crash in #Lombardia 🙏 pic.twitter.com/HzOcNf2YLB

Davide Bramati (Deceuninck – Quick-Step) on the RAI: “Everything is OK with Remco Evenepoel.”

#IlLombardia – We think this is Evenepoel’s bike. He was no where to be seen. pic.twitter.com/I5gEzmJTrp

The reporter added: “Remco Evenepoel is speaking with the doctor and out of the ravine after [the crash].”

Evenepoel was in the leading group when he reportedly somersaulted onto his back after hitting a wall as he attempted to add to his leading tally of nine wins so far this season.

His latest win came last week at the Tour of Poland, where his teammate, Fabio Jakobsen, had to be hospitalized and put into an induced coma after a huge crash during the first stage.

Jakobsen required having plastic surgery to his face following the incident in which he struck a pole after breaking through barriers.

This is so sad. I hope he is going to be okay

I am still shaking. I hate this.

While some called for replays of the accident to be removed and left out by television coverage, another said: “That’s quite an impact.

“Just hope he comes out unscathed.” 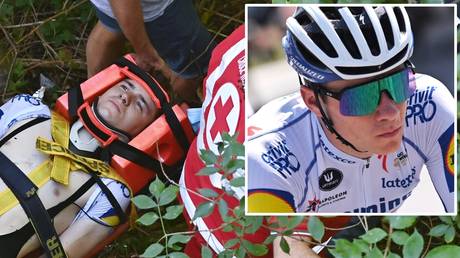