YouTube star Houston Jones will be walking with a limp today after his hamstring turned BLUE after he allowed former UFC title contender Stephen ‘Wonderboy’ Thompson to deliver several stinging leg kicks to him in a viral stunt.

Jones, who brags about “doing stupid things for your entertainment,” posted the video of him with Thompson to his near 1.5 million subscriber base on social media – but he may be regretting his decision after asking Thompson to show him what it is like to receive a kick from one of the UFC’s premier strikers.

Thompson, the self-described “nicest mofo” in the sport, duly obliged and despite delivering the technique at what he called “45 percent power,” it was clear that Jones was unprepared for the barrage – something which became immediately obvious when Jones’ legs began to swell and bruise.

Getting leg kicked by a UFC fighter was a great time! I hope your leg is alright though @wonderboymma Click the link in my bio to watch the full video on my YouTube channel!

The video shows Thompson, who twice challenged Tyron Woodley for the UFC welterweight championship, practicing his moves in a gym before speaking with Jones. Thompson then delivers a series of kicks, with Jones being knocked down despite protecting himself with a kick shield.

Jones then takes a kick to his unguarded leg and falls to the floor once again.

Thompson then jokes that Jones may require an amputation, adding that he “may nor may not be able to walk for the next few weeks.” 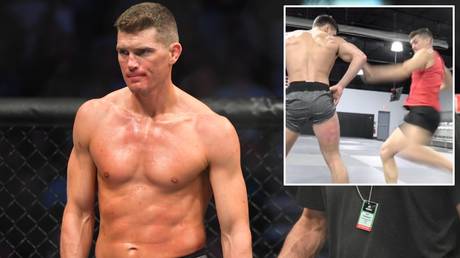 'Our bodies are capable of ma...