Eight-time NBA All-Star Vince Carter, 43, has announced his retirement from basketball an incredible 22 years after entering the league, as he says on Thursday that he finally feels the time is right to step away from the court.

Speakng on The Ringer’s ‘Winging It With Vince Carter’ podcast, the player nicknamed ‘Air Canada’ confirmed that he is “officially done playing basketball professionally” after announcing last year that the 2019-20 season would be his last after inking a one-year deal with the Atlanta Hawks.

Carter hasn’t played in the league since the season was suspended following the coronavirus outbreak and given the fact that the Hawks’ poor form this season meant that they aren’t to be included among the eight teams who will comprise the amended finale to the season, it means Carter’s career came to an end in March.

His stepping away from the sport is a bittersweet moment. He admitted that it was a difficult decision to make, especially given that he didn’t realize his last appearance in March was to be his last, but takes solace in the fact that he was successful with his last ever shot – a late 3-pointer in the Hawks defeat to the New York Knicks.

What are your favorite @mrvincecarter15 memories?

“If there was any disappointment because of the season – any of that – it was kind of easier to put it aside and handle it that way,” Carter said. “It’s like, OK, it’s something bigger than my career… It’s unfortunate, but with the coronavirus taking people’s lives rapidly, that’s the big picture in my mind.

“As a player playing your last game – whether you know it or not – you always want to say, ‘well, at least I made the last shot of my career.’ And I can actually say that, so I’m happy.”

Carter, who was the fifth pick in the 1998 NBA Draft, steps away from the sport as the 19th all-time best points scorer in league history. His average of 16.7 points per game stands him among his peers as one of the sport’s most consistent players and he is heralded as among the best slam dunkers in the sport’s history. 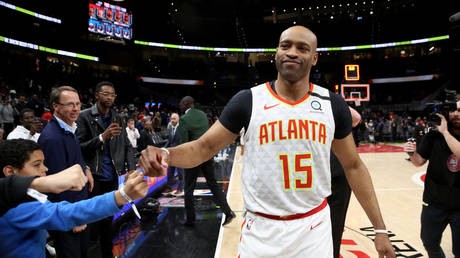