Brazilian striker Neymar struck his first two goals of the season as Paris Saint-Germain thrashed Angers 6-1 in their Ligue 1 clash on Friday night.

Neymar’s brace was joined by strikes by Alessandro Florenzi, Julian Draxler, Idrissa Gana Gueye and Kylian Mbappe as PSG registered their fourth successive win of the season to move to second in the table, just one point behind early-season pacesetters Rennes.

Neymar accused Marseille Alvaro Gonzalez of racial abuse after he was sent off for striking the defender, while the Brazilian was accused of racially abusing Gonzalez’s teammate Hiroaki Sakai during the same match.

Neymar served a two-game suspension for his red card in that match, but now he’s back in the side and back in goalscoring form.

The Brazilian struck 13 goals in 15 Ligue 1 appearances last year as he helped fire his side to the French league title, which they won by a huge 12-point margin.

Now they’re looking to retain their crown while also competing on the European stage in the UEFA Champions League.

The French side was drawn alongside Manchester United, RB Leipzig and Istanbul Basaksehir in Group H, and hopes are high that they will progress from the group and head into the knockout stages of the tournament. 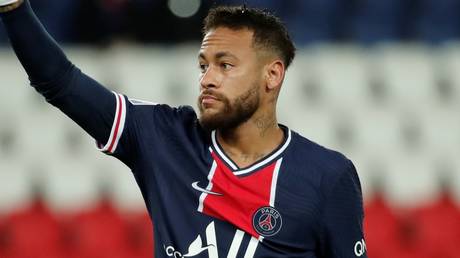