‘Of course, why not?’: UFC sensation Khamzat Chimaev says he’s open to fighting at HEAVYWEIGHT

‘Of course, why not?’: UFC sensation Khamzat Chimaev says he’s open to fighting at HEAVYWEIGHT

Khamzat Chimaev has already competed in two weight classes in his brief UFC tenure thus far but the Chechen-born Swede isn’t ruling out competing in several more as he continues to plot his fighting future.

Chimaev announced himself to the mixed marital arts world on Fight Island this past summer, winning two fights in the span of just 10 days (and in two separate divisions) against John Phillips and Rhys McKee.

He followed that up earlier this month with a one-punch knockout of experienced veteran Gerald Meerschaert, meaning that ‘Borz’, which is the Chechen word for ‘Wolf’, now has more UFC fights on his resume (3) than he has total punches absorbed (2).

The 26-year-old fighter’s next move appears unclear for now. It had been thought that the UFC were aligning the stars for Chimaev to test himself against submission ace and former multiple-time world title contender Demian Maia, but UFC brass appear to have cooled on that idea.

So what then for Chimaev?

He has made clear that he is willing to accept the challenges of all comers and, judging by comments reported by Russian outlet TASS, he may even be willing to jump several divisions to heavyweight in search of further tests.

“We’ll see, there’s that option as well,” Chimaev said when asked about the potential of fighting in the UFC’s heaviest weight category.

92kg roughly translates to around 202lbs – a weight which would make him eligible for the light heavyweight fold, but he would have to pack on a few more pounds to compete at heavyweight.

Even if Chimaev were to register a weight of, say, 210lbs, he would still find himself at a sizeable disadvantage compared to some of the heavyweight division’s most robust fighters.

Of course, it remains unlikely that the UFC would entertain the idea of Chimaev competing in numerous weight classes – and it also stands to reason that ‘Borz’ would be best served concentrating on one division only while he underscores his title credentials and continues to rise in the rankings.

One thing is certain though: this is a man who welcomes the challenge of all comers, regardless of any weight disadvantage he may have – and this, coupled with his ravenous appetite for competition, will likely be music to the ears of UFC brass as they look to build the reputation of another potential superstar. 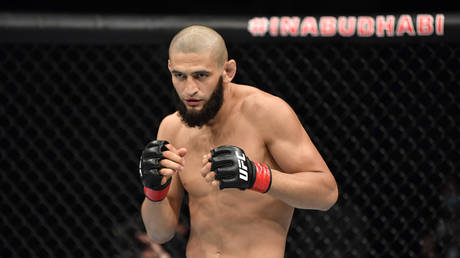