UFC welterweight title challenger Gilbert Burns has queried why Conor McGregor remains in the UFC rankings despite recently announcing he was quitting the fight game.

Earlier in June the 31-year-old Irishman said he was calling it quits, citing a lack of “buzz” from the sport and claiming he was frustrated at the UFC for supposedly dragging its heels over his next bout.

But three weeks on, McGregor remains in the UFC rankings, sitting number four in the lightweight division and number eight in the pound-for-pound scale.

That contrasts with another recently-retired fighter, two-weight champ Henry Cejudo, who has been dropped from the ratings despite retiring shortly before McGregor.

That anomaly doesn’t appear to sit well with Burns, who challenges welterweight king Kamaru Usman for the title at UFC 251 on July 12.

“Cejudo retired they took him out of the rankings very quickly let’s do it with Connor as well!,” the 19-3 Brazilian star tweeted.

Cejudo retired they took him out of the rankings very quickly let’s do it with Connor as well! 🤔🤔🤔

There’s unsurprisingly a heavy dose of skepticism over whether McGregor will stick to his retirement vow, given it’s the Dubliner’s third such pledge in the past four years.

One man apparently still none the wiser over the Irishman’s future is UFC boss Dana White, who said at the weekend that he had not spoken with McGregor since his retirement statement. 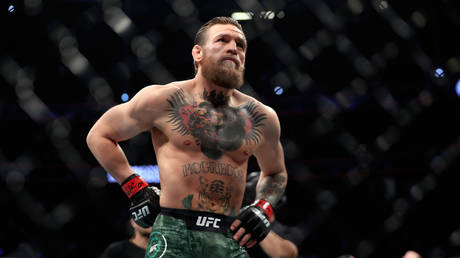