Defeated BMF champion Jorge Masvidal says the better man won when he lost to Kamaru Usman at UFC 251, but said he now knows he can dethrone “The Nigerian Nightmare” after a full training camp.

Masvidal stepped in on just six days’ notice to face Usman on “UFC Fight Island” on Saturday night, but lost out on the scorecards after Usman used his strength to smother the Miami man’s noted striking arsenal.

Speaking after the fight, Masvidal said he wouldn’t complain about the result, but did say he knew he could do better, if given more time to fully prepare for the challenge.

“I hate coming up short. I ain’t going to make no excuses,” he told reporters after his defeat.

“I made a lot of mistakes. I tried to fight in spots where I didn’t think my gas tank was the greatest. Right when I would get loose, he would clinch me up and take it right back into his world.

“So, I’m not going to take anything away from him. He won fair and square. I will do whatever it takes to get back in front of that man and compete again and get my hand raised.”

Masvidal said that, following five rounds of hands-on experience against the UFC welterweight champion, he has the blueprint he needs to defeat Usman if they meet again in a UFC championship rematch.

“I’ve got a good formula in my head though on how to beat him the next time,” he said.

“I thought I had the formula. Now I know the formula — it takes a lot of gas tank, a lot of conditioning, a lot more wrestling rounds with high-level guys. So I definitely got a square root on how to beat this guy.” 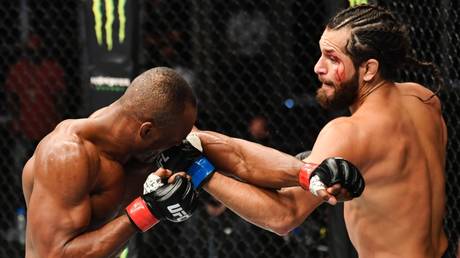