The fallout from last week’s riots at the US Capitol in Washington DC has already cost Donald Trump his precious Twitter account, and now it looks to be hitting him in another place where it hurts: his love of golf.

Trump has been widely condemned for inciting the violent scenes which led to the deaths of five people, including a US Capitol police officer, on Wednesday as his supporters stormed the government building in a bid to overturn the certification of Joe Biden as president-elect.

That criticism has come not least from Big Tech companies, who have coordinated to ban the outgoing world leader from practically every major online media platform.

When Trump’s administration expires sometime around noon eastern time on January 20, one might expect him to revert to type and retire to one of his many golf courses.

But Trump’s love affair with the sport looks set to be tested after a PGA insider reported that golf’s governing body is set to announce that the 2022 PGA Championship is to be moved from Trump’s Bedminster club, with officials set to announce the switch soon after Trump’s White House exit.

“The odds that ’22′s PGA Championship will happen as scheduled in New Jersey are about as good as the chances of you or I winning it,” Golfweek’s Eamon Lynch wrote.

“Seth Waugh, the PGA of America’s CEO, was a banker and has an alert eye for high-risk exposure. He knows that Trumpism is likely to be an equally incendiary force in the ’22 midterm elections and that any affiliation is poisonous.

“Waugh will be forced to move the event and face down a small but vocal faction of his membership who remain true believers. Moving its major from Trump National has been debated internally at the PGA for more than two years, but executives have been reluctant to antagonize a famously vindictive man who controls the Internal Revenue Service. Such concerns melt away in 10 days, if not sooner.”

Trump is known to have many supporters within golf, with names like Jack Nicklaus and John Daly among those to have pledged support, but Lynch is of the opinion that the incident at the US Capitol has stripped Trump of the support of some of his most ardent allies.

“The events of January 6 that left five people dead ought to make him a pariah everywhere. Including in golf,” he writes.

“Arguably even more sullied are the reputations of Gary Player and Annika Sorenstam, who attended the White House to receive the Presidential Medal of Freedom from the man who just one day earlier had incited the mob that killed a police officer.” 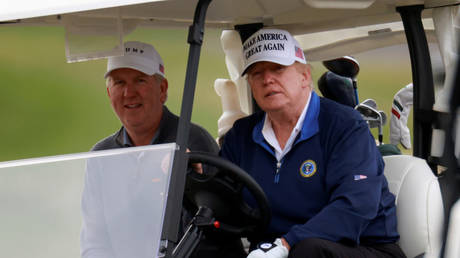