Srdjan Djokovic has suggested that it was Grigor Dimitrov, and not his son Novak, who was responsible for a spate of coronavirus infections during the highly-controversial Adria Tour.

Djokovic revealed that he had tested positive for the coronavirus in days following the tournament he arranged in the Balkans, after which the Serbian world number one came in for stinging criticism for a perceived failure to observe social distancing at the event, while also bringing in players from other affected regions.

The 33-year-old star was also filmed dancing shirtless at a nightclub.

In addition to Djokovic, Borna Coric, Grigor Dimitrov and Viktor Troicki have all also tested positive following the tournament which took place across successive weekends in Serbia and Croatia – but despite Novak issuing a statement in which he apologized for his role in the infections, the elder Djokovic has come to the defense of his son.

“How did the infection come about? Probably because Dimitrov came sick, who knows where,” he said to RTL.

“He was not tested in (Croatian city) Zadar, but somewhere else. I don’t think that’s right. He brought great harm to you in Croatia, and to us as a family, and to Serbia.”

Dimitrov confirmed his positive test on Sunday after playing Coric at the event, with the tournament swiftly cancelled after he revealed his diagnosis.

“Nobody is well, not even my son. We have to come out stronger from this and understand that everything will pass, and in some way we have to protect ourselves,” Srdjan continued.

Srdjan has also expressed controversial opinions about Djokovic’s rivals in the past, expressing earlier this year that he thought Swiss star Roger Federer was jealous of his son.

“Federer has been jealous of Novak from the moment he made his breakthrough because he knew that my son was better than him and that he would tower over him,” Srdjan said to Serbian newspaper Novosti.

“Federer is an outstanding tennis player, but I couldn’t say that about his humanity.” 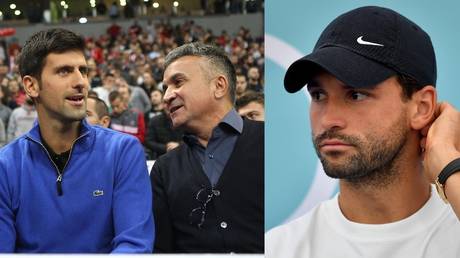 It’s Israel’s CHOICE whether to an...