Former Wimbledon champion and coach of world No.1 Novak Djokovic, Goran Ivanisevic, has become the latest tennis figure to announce that he has tested positive for coronavirus following the controversial Adria Tour.

Retired Croatian tennis great Ivanisevic announced his diagnosis via a statement on social media, saying that he has tested positive for the virus despite two previous negative tests in the past ten days, and states that he will undergo a period of self-isolation.

Ivanisevic’s positive test follows similar results from the likes of Djokovic, Grigor Dimitrov, Borna Coric and Viktor Troicki who are understood to have contracted the virus during the ill-fated Adria Tour organized by Djokovic which was canned following the spate of positive test results.

“Unfortunately, after two negative tests in the last 10 days, I have just found out that I tested positive for COVID-19,” Ivanisevic wrote on Instagram.

“I feel good and don’t have any symptoms. I would like to inform everyone who has been in contact with me that I tested positive and ask them to take extra good care of themselves and their loved ones.

“I will continue to self-isolate as I have been doing already. I wish everyone who got infected a speedy recovery.”

Ivanisevic was tournament director for the Croatian leg of the Adria Tour charity tournament but organizers had come under fire for a perceived lack of social distancing regulations at the event. Several others, including Djokovic, were pictured dancing at a nightclub in the days before the test results were made public.

Djokovic was heavily criticized by members of the tennis fraternity for pushing ahead with the tournament in spite of the public health risks associated with it, though Ivanisevic was – somewhat predictably – not among his detractors.

“Everybody is smart now, and they are attacking Novak. He tried to do a great thing, a humanitarian thing. We were locked down for three months. He organized this tour,” he said.

“OK, maybe you didn’t need this,” he added, referencing the notorious clip of a shirtless Djokovic dancing in a nightclub.

“And how do you know anyone even got infected at that party?“

Djokovic, however, issued a public apology following the spate of infections, saying that the was “so deeply sorry” that the tournament “caused harm” to people. 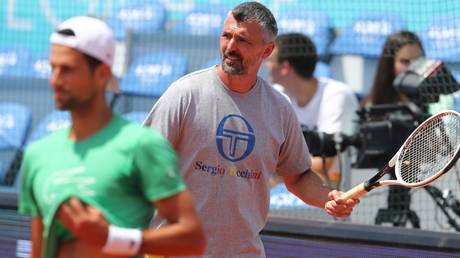