‘Not wearing a mask because he can’t catch anything’: Fans ruthlessly troll misfit Chelsea keeper Kepa

‘Not wearing a mask because he can’t catch anything’: Fans ruthlessly troll misfit Chelsea keeper Kepa

Chelsea flop Kepa Arrizabalaga has once again become the target of social media trolls after the Spanish goalkeeper was pictured not wearing a mask as he joined the Blues squad ahead of Tuesday’s Champions League tie with Rennes.

The Spanish goalkeeper arrived in West London two seasons ago for an eye-watering world record transfer fee, almost none of which has yet been paid back on the pitch. Frank Lampard moved this past summer to add Edouard Mendy to his ranks from Tuesday’s Champions League opponents Rennes and the Senegalese has overseen something of a defensive revolution at Stamford Bridge, conceding just twice in his nine games between the sticks.

Mendy’s early success hasn’t quite appeased the rogue’s gallery of trolls who populate Twitter, however, with the Spaniard once again the target for online jibes over his performances when he was pictured failing to observe the correct COVID-19 protocols as his team travelled to France in the hopes of securing their qualification for the Champions League knockout stages.

Kepa isn’t wearing a mask because he can’t catch anything pic.twitter.com/0cRXuHRl3V

Pictured walking behind (a mask-wearing) Thiago Silva, Kepa  can be seen walking with his hands in his pockets towards the club’s plane before they jet off to northwestern France – with the caption, “Kepa isn’t wearing a mask because he can’t catch anything.”

Some commenters, though, took pity on the relentless trolling of the Spanish international, writing: “You guys have bullied this man too much. You should know when to stop.”

One person replied: “But Kepa can’t stop the ball.”

“Leave the man alone, he can’t be in a good place,” wrote another.

Kepa will almost certainly warm the bench once again for a Chelsea side who can secure their passage to the next stage of the competition with a win away to the French side. Chelsea will also welcome back former PSG man Thiago Silva who was not considered for selection in Chelsea’s win against Newcastle last weekend following the international break.

Kai Havertz, the big money summer import from Bayer Leverkusen, is back in the Chelsea squad after completing a period of self-isolation following a Covid-19 diagnosis.

United States star Christian Pulisic’s hamstring injury hasn’t cleared in time for him to take part but the Chelsea medical staff remain hopeful that he will be available for selection for this weekend’s Premier League game with London rivals Tottenham.

And Frank Lampard is hoping that his squad can get as close to full fitness as possible in advance of a festive period which will see his team play EIGHT games in December.

“I have looked at the schedule and it is brutal,” Lampard told the media this week. “We play Arsenal on Boxing Day and then Aston Villa two days later.

“We need to try to win this game and if we can get into the next round then we could rest players, but we still want to win the group. I am confident in the squad, even if we rotate.” 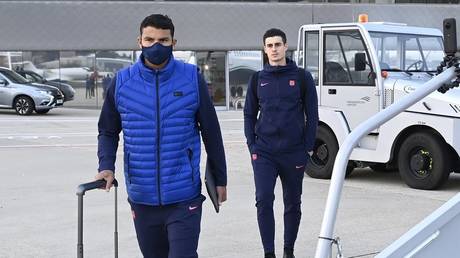