Not-so-special one: Jose Mourinho surges to the front of the Premier League sack race amid Tottenham’s terrible mid-season slump

Not-so-special one: Jose Mourinho surges to the front of the Premier League sack race amid Tottenham’s terrible mid-season slump

Tottenham Hotspur’s dismal recent form could spell the end of Jose Mourinho’s tenure after a host of bookmakers installed the Portuguese boss as the favorite to be the next for the Premier League managerial scrapheap.

Spurs have come up short in five of their past six Premier League fixtures, as well as being turfed out of the FA Cup after they drew the short straw in a nine-goal thriller with Everton.

That recent run has been a far cry from the form that had Mourinho’s side at the summit of the table a few months ago, prompting bookmakers to forecast that he could be the next head coach in line for the chop.

The club’s 2-1 defeat to London rivals West Ham on Sunday has amped up the pressure even further on the under-fire Mourinho, with two prominent UK bookmakers’ slashing the odds on him being issued with his marching orders from 7/2 to 23/10 – figures that make him the favorite to be sacked ahead of Newcastle’s Steve Bruce and Crystal Palace’s Roy Hodgson.

The failure to beat West Ham means that Jose Mourinho now has the lowest league win percentage of any Tottenham manager since Juande Ramos.

He’s lost the team, has to go.

The contrast between Spurs’ current form and the performances that made them early-season contenders is stark. Critics have said that Tottenham have become over-reliant on the form of star striking duo Harry Kane and Son Hueng-min, and that the team vastly underperform when the pair are out of the team – an all-too familiar situation when it comes to the injury-prone Kane.

Mourinho doesn’t believe that now is the same to sound the alarm bells despite having the lowest winning percentage of any Spurs boss since Juande Ramos, who lasted less than a year in the job.

“I would say a bad – really bad – run of results. That is obvious. We’re losing too many matches.”

In typical Mourinho fashion, he was unwilling to accept any criticism from the media when asked if his coaching style was having a negative impact on the team, defiantly telling them that he remains one of the most productive and reliable mangers in world football.

“No, not at all,” he insisted. “Mine and my coaching staff’s methods are second to nobody in the world. I think for a long, long time, we have problems in the team that I cannot resolve by myself as a coach.”

Liverpool’s Jurgen Klopp still charts highly in the sacking stakes. The club’s run of four straight home defeats has left the club mired outside of the Champions League places – with the German now fourth-favorite to lose his job in the coming weeks, which would have been unthinkable a year ago. 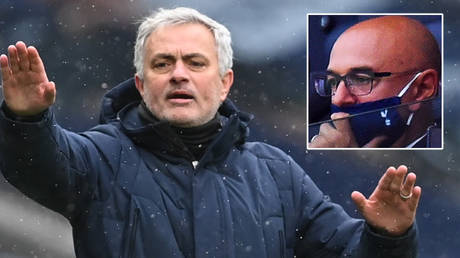