American sprinter Noah Lyles looked to have smashed Usain Bolt’s 200m world record in the Inspiration Games only to find out shortly afterwards that the time was invalid because he had only run 185m.

Lyles clocked a time of 18.90, seemingly obliterating Bolt’s 19.19 world record which has stood for more than a decade.

The American thought he had run over half a second quicker than his personal best, in a feat which seemed all the more remarkable considering he was running into a headwind.

For a spell after the race Lyles – and the race commentators – were left to grapple with the thought that he had just produced one of the all-time great performances.

Except…he started at the wrong start line, according to the broadcast.pic.twitter.com/jqpAZl7qnK

“That cannot be right!” UK commentator Steve Cram said afterwards. “Even he has got his hands in the air wondering what is going on!“

Five minutes or so later it was revealed that no, it wasn’t right. A review of the race later revealed Lyles had stared the race in the wrong lane and had only run 185m of the 200m race, explaining his superhuman time.

The situation prompted a tweet from Lyles, as well as his brother Josephus – with Noah saying that they “can’t be playing with his emotions like this.“

You can’t be playing with my emotions like this….
got me in the wrong lane smh 🤦🏾‍♂️

Despite prompting a few laughs online, the incident comes as a blow to the Inspiration Games which had hoped to run the event seamlessly in light of coronavirus restrictions, relying on television and timing technology.

Athletes competed against one another from various venues across the world, with starting guns timed to begin races simultaneously and races being coordinated into a split screen broadcast.

Lyles, last year’s 200m World Champion in Doha, reached the bend on his track well in advance opponents Christophe Lemaitre and Churandy Martina, both of whom who were racing in Europe.

It was quickly revealed that the emphatic nature of his win had been assisted by an error in placing the starting blocks – essentially giving him a 15m head start on his rivals.

Christophe Lemaitre was instead declared the winner of the race, and was handed a $10,000 check for his efforts. 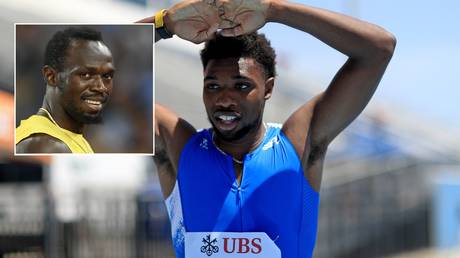