Close
Trending News
HomeSport‘Not even breaking a sweat’: Novak Djokovic breezes into Roland-Garros second round as US Open row seems far behind him

‘Not even breaking a sweat’: Novak Djokovic breezes into Roland-Garros second round as US Open row seems far behind him

‘Not even breaking a sweat’: Novak Djokovic breezes into Roland-Garros second round as US Open row seems far behind him

Fans were in awe of Novak Djokovic on Tuesday as he opened his 2020 French Open campaign with an impressive straight-sets victory over Mikael Ymer.

“Djokovic not even breaking a sweat,” cooed one fan on Twitter, while another suggested Djokovic was simply “toying” with the Swede.

Others described the world No. 1 as “unbeatable” and one fan likened the contest to a “practice match” for Djokovic.

Djokovic not even breaking a sweat 😓 #RG20

Djokovic is toying with this Ymee kid 💀. You can tell he’s not taking this last set seriously.

The 33-year-old quickly set the tone as he broke Ymer’s serve in the opening game, and he raced to a bagel in the first set in just 20 minutes, with his opponent claiming just seven points.

Djokovic was even flashing his impressive skills in between points.

Even Novak has to give a chuckle 😱👏😁@DjokerNole #RolandGarros pic.twitter.com/CbcR5ZwPH4

Ymer offered slightly more of a challenge in the second set, managing to break back against his illustrious opponent and winning the point of the match with a sublime shot between his legs.

He was still broken three times, however, as he struggled to contain the relentless 17-time Grand Slam champion, who hit 10 winners along the way.

The pair traded breaks again in the third set, but the gulf in class quickly became apparent once more as Djokovic rattled off three games in succession to see out the match.

The 2016 French Open champion finished the contest with 32 winners, while Ymer mustered just 12.

Djokovic will take on either Hugo Dellien or Ricardas Berankis in the second round. 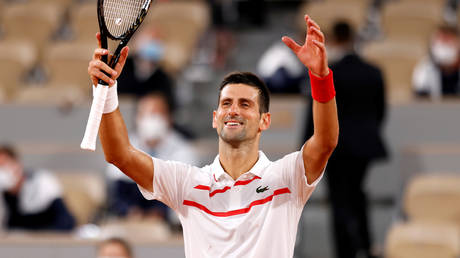