Police say no criminal offense was committed by those behind the ‘White Lives Matter’ banner which sparked outrage after being flown over the Premier League match between Manchester City and Burnley.

The banner, reading ‘White Lives Matter Burnley’, was seen trailing a plane flown over Manchester City’s Etihad stadium on Monday, shortly after players and officials has taken a knee in support of the Black Lives Matter movement.

The incident sparked instant opprobrium as well as a scathing attack on the fans behind it by Burnley, who vowed to slap those responsible with lifetime bans.

Burnley fan Jamie Hepple later claimed responsibility for the stunt, but was defiantly unrepentant in a message posted on Facebook in which he stated: “I’d like to take this time to apologise… TO ABSOLUTELY F*CKING  NOBODY!”

However, police in Lancashire looking into the banner have now stated that the stunt was not a criminal offense.

“Lancashire Constabulary has been in liaison with Greater Manchester Police, the Aviation Authority and the Crown Prosecution Service regards the ‘White Lives Matter’ banner that was flown over the Etihad Stadium,” said chief superintendent Russ Procter.

“After assessing all the information available surrounding this incident we have concluded that there are no criminal offenses that have been disclosed at this time. We will continue to work with our partners at the football club and within the local authority.”

Burnley have vowed to root out those responsible and slap them with bans, while club captain Ben Mee said after Monday’s 5-0 defeat at Manchester City that he felt “ashamed” and “embarrassed” by the incident.

Burnley fan Hepple has since deleted his social media accounts, although his employer, aerospace components company Paradigm Precision, has said it is conducting a probe.

“The matter is being taken very seriously and a full investigation is being carried out into the facts and potential breaches of a number of the company’s equality, diversity and social media policies,” the company said.

Hepple is believed to be part of the right-wing Burnley fan group ‘The Suicide Squad’, who reportedly helped crowdfund the flyover.

Blackpool airport, from where the contentious flight took off, has said it will stop operating banner flights following an emergency review. 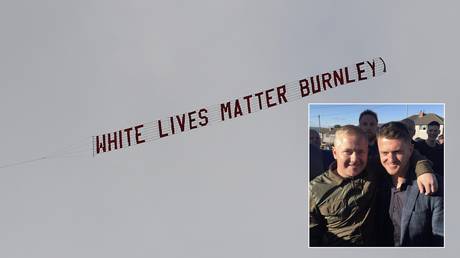