Stefanos Tsitsipas reached his second Grand Slam semifinal on Wednesday as he beat Andrey Rublev at the French Open, avenging his defeat to the rising Russian star in the Hamburg European Open in September.

Rublev, who entered the match with a 2-1 head-to-head record against Tsitsipas, had drawn first blood as he broke to lead 3-2 in the opening set, after giving the No. 5 seed the runaround with a finely controlled rally.

The 22-year-old quickly found himself 5-3 up from there, but he won just three of the next 17 games as Tsitsipas rallied superbly to dominate the remainder of the contest.

Despite his promising start, some nerves appeared to set in for the No. 13 seed as he made some unforced errors at crucial moments to let Tsitsipas break him twice on his way to taking the first set.

Tsitsipas, meanwhile, had grown into the match and displayed some excellent shot-making along the way.

The speed. The shot. The Stef.

Buoyed by his comeback in the first set, the second was a one-sided affair in the Greek’s favor as he began to turn the screw.

He is doing no wrong today.@StefTsitsipas now with a two sets to love lead over Rublev.#RolandGarros pic.twitter.com/2if73pizQs

Tsitsipas cut an impressive figure as he took just 32 minutes to dismantle Rublev 6-2, although he benefited from some good fortune when a netcord bounce went his way on his first break point.

It didn’t take him long to find a breakthrough in the third either, taking a 3-1 lead after Rublev sent a weary backhand beyond the baseline.

The Russian was able to save a match point as he avoided a second double-break, but Tsitsipas soon ended proceedings as the deserved winner.

Fans were disappointed not to see more from Rublev in the contest.

“For all the skills Rublev has… he’s not a big match player yet,” said one, while another added: “Rublev not even taking a set off Tsitsipas is absolutely wild to me.”

For all the skills Rublev has…he’s not a big match player yet. This match against Tsitsipas was his chance to show it. Especially considering he JUST beat him 2 weeks ago #RG20

Others were impressed with how strong Tsitsipas looked, with one fan describing him as “scary good” while another said he was “whoopin Rublev’s ass.”

He will face either Novak Djokovic or Pablo Carreno Busta in the semifinal at Roland Garros. 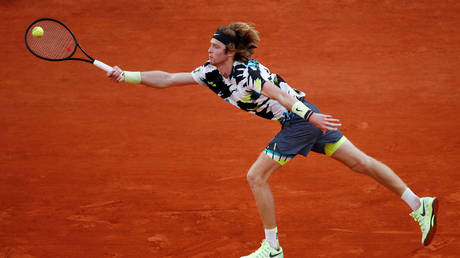