‘No way that’s real’: Fans stunned by jet-heeled Khabib’s burst of pace as UFC star plays football – but was video speeded up?

‘No way that’s real’: Fans stunned by jet-heeled Khabib’s burst of pace as UFC star plays football – but was video speeded up?

Football-mad UFC champion Khabib Nurmagomedov showed off his skills in a celebrity game in Dubai, where one burst of pace down the line had fans clamoring for their team to sign up the MMA star.

Khabib is in the UAE along with his entourage as he prepares for the UFC debut of his cousin, Umar, on Fight Island later this month.

A popular figure in the Middle East, Khabib was feted with a banquet and giant cake in his honor prepared by Turkish celebrity chef Burak Ozdemir in Dubai on Friday.

That was followed by a football match over the weekend where the Russian star captained a team against a side led by fellow UFC fighter Islam Makhachev.

Action from the match included a particular burst of speed from Khabib as he took the ball past Ozdemir down the wing.

The clip had fans purring, with one sharing the footage and joking “Khabib’s got 99 pace” – referring to the skill attributes assigned to players on the popular FIFA video games.

“I want to see more of that. Lol look at that sprint!” added another, while some said the UFC champ was quicker than the likes of Manchester United full-back Luke Shaw.

Khabib is faster than luke shaw

Others joked that 32-year-old Khabib played more football than big-money Arsenal outcast Mesut Ozil, who has been sidelined for his team since the start of the season.

He plays more football than Ozil

The speed of the right-back, Ozdemir, was also a talking point as his unwieldy turn and chase no doubt made Khabib look far more rapid.

Lol that right back got on his bike and his speed somehow didn’t increase. Sluggish

But the nature of the footage was also questioned by some, who wondered whether it had been speeded up.

This has to be sped up. His run is so fast but his form is hilarious. Almost like baby steps but at a million miles per hour 😂

The account that shared the footage suggested that the clip was unedited, although highlights from by Ozdemir on his Instagram account showed the same video mixed with speeded-up footage, meaning that the clip may well not have been in real time.

This being Khabib, one fan couldn’t resist a comparison with the Russian star’s nemesis Conor McGregor, claiming the Irishman had a far superior left foot.

But what about that left foot? Nobody can take that pic.twitter.com/2PkEJbpY3p

Before the game in the UAE, Khabib had been seen chatting in a video call to his friend Cristiano Ronaldo, prompting jokes from rival captain Makhachev that he was trying to rope in the ultimate ringer for the match.

In the end Ronaldo didn’t put in an appearance as he was in action for Juventus on Sunday, with Khabib instead stealing the show with a burst of pace the Portuguese ace would have been proud of. 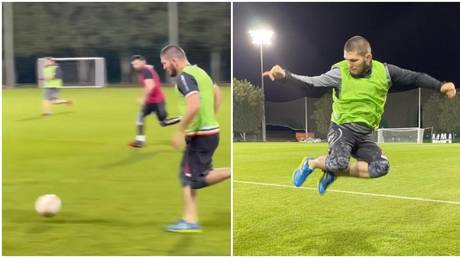