Denver Nuggets’ Troy Daniels has given a culinary insight into life in the bubble as NBA teams bid to restart their season – and social media viewers savaged the spread while the shooting guard seemed unimpressed with his food.

Daniels, whose reported salary of a relatively modest $385,000 still means he is used to being able to afford fine dining, showed various items of food in packaging around a tray as he acclimatized to life at Disney Orlando alongside his Nuggets teammates.

NBA teams are being isolated at three resorts as part of a masterplan to minimize the spread of Covid-19 and resume the season, which was suspended on March 11, at the end of July.

The 6ft 4in, 200lb shooter accompanied the photo on his Instagram story with an emoji suggesting his disaproval, leading to an underwhelmed reaction on social media.

Per the menu: Only the ‘appetizers’ are pictured

🤷🏻‍♀️ either way, it still looks like a Sorry ass dinner though lol 😂 pic.twitter.com/hV2wWVoO7P

“No way LeBron is eating this,” replied two-time All-Star Isaiah Thomas, namechecking LA Lakers talisman LeBron James, whose personal wealth of around $450 million is likely to make him one of the stars used to the mealtime luxuries provided by personal chefs.

James appeared to be eating tacos from a plate on his Instagram story on Tuesday, making no reference to the bubble project that is rumored to have cost the NBA around $216 million.

Players have been offered a range of meal choices as part of the nourishment provided to them in isolation, with sports nutrition staples including chicken, fish, grilled vegetables and juice on the menu.

Reports have suggested that they could be allowed to eat together under more familiar conditions once their initial quarantine is over.

Fyre Fest 2.0 in the NBA’s bubble. Documentaries will be made 👀 pic.twitter.com/Up9Wd6YXo3

Brooklyn Nets guard Chris Chiozza’s plate included pasta and polenta in styrofoam boxes, causing a fan to write: “It looks even worse than we expected.”

A sports podcast account and host joked that Daniels’ meal would have been served at Fyre Fest, the disastrous “luxury music festival” that left ticket buyers who had paid extravagant prices stranded when its high-end promises fell through on an isolated island.

“The NBA bubble dinner has that Fyre Fest feel to it,” they said.

“Fyre Fest 2.0 in the NBA’s bubble. Documentaries will be made.”

Nuggets star Nikola Jokic, who tested positive for Covid-19 in his native Serbia at the end of June, was understood not to have traveled with his team, reportedly remaining in his homeland until he has passed two negative tests. 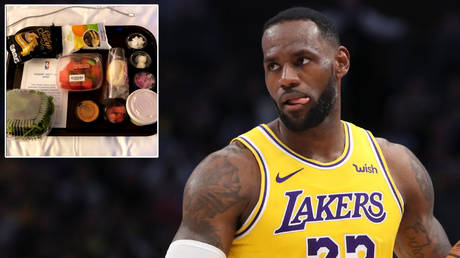