The Week 4 game between the New England Patriots and the Kansas City Chiefs has been put back after Cam Newton became the highest-profile star so far to test positive for COVID-19, leading to fears of further chaos for the NFL.

Newton and Chiefs practice squad quarterback Jordan Ta’amu were confirmed to have tested positive the day before Sunday’s showdown, continuing a concerning week for the competition after the Tennessee Titans’ clash with the Pittsburgh Steelers was postponed two days earlier.

The game between the Titans and the Steelers, which was the first postponement since the return of the NFL during the pandemic, will be rearranged for later in the season, but officials have initially said that the Patriots and Chiefs will meet on Monday or Tuesday.

The decision not to play the game on Sunday came after the Chiefs expressed concerns over Newton’s teammates traveling by plane so soon after his positive test.

Fans reacted with shock after Newton, who has been tipped by some to challenge for the NFL Comeback Player of the Year award, was ruled out to leave his team with the replacement options of 2019 fourth-round draft pick Jarrett Stidham or journeyman Brian Hoyer, a player ten years Stidham’s senior at 34.

They also speculated that the positive tests for either side could be a signal of further bad news to come, as proved the case when 16 Tennessee players and staff members ultimately tested positive.

“NFL can’t go on like that,” said actor Reggie Watkins.

“That entire [Patriots] game is now a washout.

Just suspend the season, injuries and covid just making it not worth watching

NFL can’t go on like that. That entire game is now a wash. Competitive balance out the window. Guaranteed loss for Pats. Game gotta come off the Vegas betting boards. Money refunded. What if it happens in playoffs? Cam is ur FF QB and now has an extra Bye week?!!

Wait, but I thought the Titans were the only team testing positive?!?! pic.twitter.com/NYlaDJF0BU

They said same thing about MLB and it’s finishing, just may need to take a few weeks off and trace/test everyone till it’s cleared. They need strict protocols though. bubble for a whole season isn’t really possible but only practice, games, home. I have to live that way now.

“Competitive balance out the window. Guaranteed loss for Pats. The game’s got to come off the Vegas betting boards, money refunded. What if it happens in the playoffs?”

Another gloomily predicted: “I’m betting on it being canceled. No way he’s the only one on the whole team and staff with it. This blows.”

Others argued over whether the NFL should have attempted the near-impossible logistics of keeping squads in a “bubble” similar to the approach used by the NBA, although many pointed out that they have been given strict instructions in order to minimize their chances of spreading Covid-19.

The Chiefs are understood to have closed their training facilities as a result of the development, following in the footsteps of the Titans and their previous opponents, the Minnesota Vikings.

I’m betting on it being canceled. No way he’s the only one on the whole team/staff with it. This blows

Its falling apart quickly isn’t it?

Why don’t they keep these players in a bubble like the nba? I know the season is long and all but if they keep em from seeing anyone out side the team and immediate family it should cut back on stuff

Only seven players had tested positive before the Titans’ outbreak, and the NFL issued a statement insisting that both the Patriots and Chiefs were consulting infectious disease experts, carrying out contact tracing and performing more tests.

The league is desperate to avoid the likely financial impact any major disruption to its schedule could cause, with around $16 billion reported to be at stake.

Newton, who was the NFL’s Most Valuable Player in 2015 and signed a one-year deal with the Patriots during the off-season following Tom Brady’s move to the Tampa Bay Buccaneers, seemed to be maintaining his fitness shortly before the news broke.

The 31-year-old shared a clip of himself on an exercise bike with his Instagram following of almost five million, adding: “No excuses.” 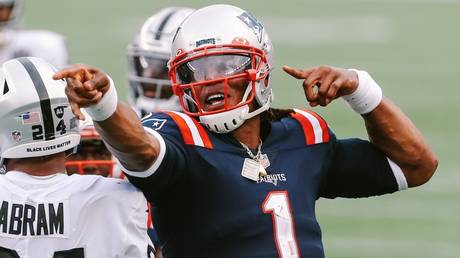