Close
Trending News
HomeSport‘No nepotism there, then?’: Fans joke after Beckham says he’s ‘so proud’ of son’s debut for reserves of US club he co-owns (VIDEO)

‘No nepotism there, then?’: Fans joke after Beckham says he’s ‘so proud’ of son’s debut for reserves of US club he co-owns (VIDEO)

‘No nepotism there, then?’: Fans joke after Beckham says he’s ‘so proud’ of son’s debut for reserves of US club he co-owns (VIDEO)

The son of football icon David Beckham, Romeo, has made his debut as a professional for the third-tier reserve team of the Inter Miami franchise his father owns – earning accusations of nepotism.

Beckham, 19, started in the right-wing position where his father rose to fame with Manchester United when his 11-year senior career at the Premier League giants began in 1992.

The former Arsenal academy hopeful, who was at the Gunners alongside brothers Brooklyn and Cruz before all three were released, turned out for Fort Lauderdale – Inter Miami’s reserve side – in a 2-2 draw against visitors South Georgia Tormenta.

“Blessed to have made my pro debut tonight,” the youngster wrote to caption an Instagram post to his 3.3 million followers celebrating his debut.

Romeo Beckham was on fire in his pro debut 🔥 pic.twitter.com/9fruWtwZcZ

His style is very familiar 👀 pic.twitter.com/70YV9BOItj

Beckham, who was previously a youth team player at LA Galaxy and Paris Saint-Germain at the same time as his dad played for the club’s senior teams, was reported to have shown some good touches and created an early scoring opportunity for his new outfit.

There was good link up play with Harvey Neville, too – who, as you might have guessed, is the son of Inter Miami coach Phil Neville, with whom David Beckham graduated from the fabled Class of ’92 with at Manchester United.

A much more experienced right back, Neville the younger was playing his 16th match for the Florida-based side after leaving the United’s youth academy to accompany his father to the States.

Beckham was brought off after 79 minutes and added on Instagram that “full focus” is now on “the next match”, which is against Greenville Triumph on October 2.

“So proud of you, mate,” Beckham senior replied on Instagram, while World Cup winner Blaise Matuidi, who plays for Miami, and celebrity chef Gordon Ramsay were also among those to congratulate the newcomer.

Beckham’s debut hasn’t been well-received by everyone, though. “No Nepotism there, then?,” one reader asked.

does it really count when your dad literally owns the club?? its like being kids again🤣 managers son always played where ever he wanted no matter how shit he was

“Jobs for the boys,” said another, while a critic claimed Beckham wouldn’t be playing in the US “if he was any good”.

Another fancifully predicted an England cap for Beckham in 12 months, concluding: “It’s who you know rather than what you know.”

Beckham did not don his dad’s iconic number 7, instead wearing 11 as he took to the flank.

One for the ladies..Romeo Beckham makes his debut for Fort Lauderdale stiffs/Reserves. England cap within 12 months? It’s who you know rather than what you know.

The family’s legacy in US soccer began when David moved from Real Madrid to LA Galaxy in 2007.

After winning back-to-back MLS Cup titles at the beginning of the 2010s, the club erected a statue in his honor to celebrate the six years the former England international spent at the Dignity Health Sports Park before heading back to Europe.

In 2014, Beckham exercised the option he had to set up a franchise for $25 million, and Inter Miami were eventually founded in 2018.

According to reports, the Champions League winner has already opened talks with Lionel Messi to join his side when the Argentina legend’s two-year deal with PSG runs out in 2023. 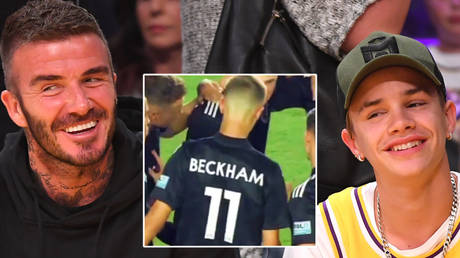