No Messi? No problem! Ronald Koeman HAILS his Barca side after leaving Lionel Messi AT HOME for Champions League tie

No Messi? No problem! Ronald Koeman HAILS his Barca side after leaving Lionel Messi AT HOME for Champions League tie

Ronald Koeman gave his strongest indicator yet that he’s preparing for life without Lionel Messi as his new-look side, without Messi, cruised to a 4-1 win over Dynamo Kiev in the Champions League.

In the boldest managerial statement of his tenure at the Camp Nou so far, Dutch boss Koeman took the decision to leave Messi at home in Barcelona as he took his side to Ukraine for Tuesday night’s clash.

Messi was the largest omission from the squad list as Koeman rang the changes for the match, making eight adjustments from the team that lost 1-0 to Atletico Madrid at the weekend.

But, after a sluggish start to the game, Koeman’s new-look side clicked in the second half as goals from Sergino Dest, two from Martin Braithwaite and one from substitute Antoine Griezmann sealed a resounding 4-1 win and sealed Barca’s berth in the last 16 of the competition.

Koeman was understandably pleased with the results of his changes, and said that his fresher lineup paid dividends in a crucial match.

“Some games turn out better than others but the biggest difference today was how fresh we looked,” said Koeman after the win.

“We did the right thing in resting some players and giving an opportunity to others who were in a better physical shape. We were much better in midfield, we showed lots of hunger and pressed our opponents very well.

Barca’s success showed that the squad is capable of producing results, even without their talismanic playmaker, and gave Koeman plenty of hope for improvement as the season progresses.

“The team played with a lot of hunger today, we scored four goals and we were able to rest some important players,” he enthused.

“The young players also got some minutes which they really deserved and they all stood their ground.”

After such an impressive performance without Messi, the big question now is whether Koeman might be tempted to keep the Argentine ace out of his lineup when Barca returns to La Liga action against Osasuna on Sunday. Watch this space. 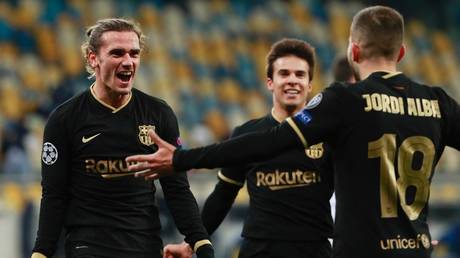