The National Basketball Association has kicked off controversy after the league reportedly approved a set list of progressive slogans players may wear on their jerseys – a move slammed as a hollow corporate marketing ploy.

The catalogue of acceptable opinions was leaked to ESPN on Friday, featuring 29 pithy ‘social justice’ mottos, among them “I Can’t Breathe,” “Power to the People,” “Speak Up” and, of course, “Black Lives Matter.” The fixed list was agreed to by the league itself and its athlete’s union, the National Basketball Player’s Association.

According to ESPN, players will be permitted to display the message above their jersey numbers for the first four days after the postponed NBA season starts back up. After that point, athletes will have the option of returning to their normal uniform, or to leave the message intact while moving their name below their number.

Though little else is known about the agreement between the NBA and the union, netizens were put off by the sanctioned slogans, suggesting the project was more a creation of a corporate focus group than players’ free expression.

I fully expect that stuff like this would’ve made up 99% of the statements on players’ jerseys, but it’s disappointing the NBA has an approved list of statements. This no longer has the feel of free speech or activism. Just marketing. Like corporate accounts posting black squares pic.twitter.com/YmWmCX6TMw

The NBA’s social justice messages worn by multi-millionaires must be approved by a consortium of billionaires? Totally normal for a revolution.

NBA – You are free to say what we say you can say.

Some couldn’t help but poke fun at the pre-selected catchphrases, while other critics forecasted significant trouble from the “woke mob” for any players who choose not to signal their virtue to spectators.

I can’t wait till “Stand Up” kneels for the anthem.

Group Economics sounds like something you find out you have to take in college. Why not the slogan, French Lit!

The NBA has announced that players have the “option” to put social justice slogans on their jerseys. Does anyone think that players opting not to wear a slogan won’t be attacked by the mob? #WokeMob #CancelCulture #Triggered #FreeSpeech

The project comes on the heels of mass protests across the US over police brutality and racism, sparked by the law enforcement killing of George Floyd, an unarmed black man, in Minneapolis in May. It would not be the first time politics crossed with professional sports in the States in recent years, with former NFL quarterback Colin Kaepernick kicking off controversy starting in 2016 by kneeling for the national anthem as a way of protesting against police violence and racial injustice. 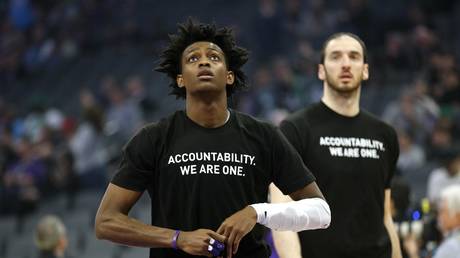