No hot water, working out with rocks: Tagir Ulanbekov reveals tough MMA upbringing in Dagestan ahead of UFC debut (VIDEO)

No hot water, working out with rocks: Tagir Ulanbekov reveals tough MMA upbringing in Dagestan ahead of UFC debut (VIDEO)

Tagir Ulanbekov is the latest fighter to graduate from the Dagestani MMA conveyor belt to the big stage of the UFC, and the 12-1 flyweight says a tough MMA upbringing will ensure he stays hungry as he looks to test himself.

And the Makhachkala native said that things are noticeably different now he’s getting set to compete in the big leagues.

Speaking to RT Sport ahead of his octagon debut, Ulanbekov said, “Everyone said UFC is the best when it comes to event organization, and fighter relations. Now I see it for myself that the conditions here are much different.”

Ulanbekov’s team has been preparing in Dubai prior to entering the UFC’s COVID-safe bubble in Abu Dhabi and after being in the region for a couple of training camps, he said the locale is becoming a welcoming, familiar one.

“We have our separate camp there, a three-week training camp. Everything was great there. Other guys are still there, they’ll be fighting in two weeks on ‘Fight Island,'” he said.

“It’s like we came back home. We got a warm welcome. Big thanks to the people that do everything for us when we come to Dubai. They really try to do everything so that we can focus on just training, eating and sleeping.”

It’s a far cry from his MMA upbringing, which took place under very different circumstances back home in Dagestan.

His spartan training regimen in his early years has helped build the sort of inner toughness we’ve seen from a host of fighters from the region over the years.

“It’s easier to train in comfort, but it’s also necessary to rough it to build character,” he said.

“Right now it’s easy for us, but before we had it rough. Guys that went through those camps know the circumstances we dealt with.

“We didn’t have hot water, we washed under freezing water. There was no gym. We had to go up and down mountains for five hours. That’s by foot, it’s an hour by car. Those were our circumstances.”

Ulanbekov even revealed that, while running in the mountains, he and his teammates worked out with rocks to help build their strength.

“Our late trainer Abdulmanap made us do that –work with rocks,” he said.

“We ran for three or four kilometers and when we got to a point we had a group lifting session.”

Those circumstances have helped Ulanbekov become one of the top flyweights outside of the UFC before he received the call to join the big show. Now he’s looking to make a big impression on his debut and move one step toward a big fight against one of the division’s big names.

“Joseph Benavidez. I’m not at the level right now. I have to make my debut first. I have to do my fight, and get to him but I’d love to try myself against him,” he said.

“I’ve been following him for a while. When I started my career, he was already an experienced fighter. I’d love to try to go against him.”

But before he gets the chance to face the likes of Benavidez, Ulanbekov will have to negotiate his octagon debut, and while his teammate and mentor Khabib Nurmagomedov won’t be in his corner to help guide him, the flyweight revealed he’d been given some simple advice from the UFC lightweight champion ahead of his first fight inside the octagon.

“Just go out, be relaxed and do your job.” 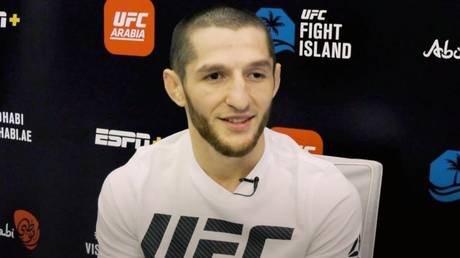